Notre Dame's Erin Corcoran says under the Trump administration, everyone is of equal importance to deport 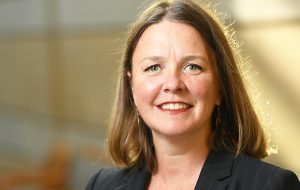 Erin B. Corcoran Executive Director, Concurrent Faculty at the Keough School of Global Affairs at the University of Notre Dame

In anticipation of this weekend's ICE raids, Erin Corcoran, U.S. immigration/asylum law & policy expert and executive director of Notre Dame's Kroc Institute for International Peace Studies, is available for interviews. Below and attached are her comments on the ongoing immigration issues at the U.S./Mexico border and the pending ICE raids. You can reach her via email at ecorc[email protected] or via cell at 202-549-2067.

People being targeted this weekend have final orders of removal from judges. Sometimes these people haven’t even had their cases heard, but have orders of removal in absentia pending against them. ICE often fails to move cases to new jurisdiction when asylum-seekers move, so they could be subject to removal without even being aware of the removal order. If an asylum-seeker appeals his/her case in federal court, it won’t stay their removal; that is a separate motion and judges would first have to rule on the merits of your case.

These raids are not the same as a cop going after someone with a warrant; these are administrative warrants. There are more protections for individuals subject to administrative warrants because a judge has not signed off on the warrant. If ICE agents knock on the door and the people inside don’t let them in, the agents cannot forcibly enter the home. Immigrants’ rights groups are educating people about their rights when ICE raids are conducted.

What changed significantly in asylum law in the mid-90s?

The changes in asylum law in 1996 created a process called “expedited removal,” which allowed border officers to summarily send a person back to their country of origin if they arrived with false documents or no travel documents. The exception to this new power was a “credible view interview.” Border officers are required to ask series of questions about a person's fear of returning to their home country and, if they expressed fear, the officer cannot remove them and they are entitled to a credible fear interview with an asylum officer. If they pass the credible fear interview they can request asylum from an immigration judge.

Other administrations were targeting high-priority deportations, so people who had criminal convictions. Under the Trump administration, everyone is of equal importance to deport. So anyone who gets caught up in a raid will be deported. They’re going after everyone and this gives a lot more discretion to officers on the ground. The other concern is that some of these children who get caught up in raids could be U.S. citizens. Most immigrant families are of mixed citizenship. Questions of separation become more complicated.

Under this administration, people who have provided protection for asylum-seekers have been prosecuted (for example, the “No More Deaths” trial). There certainly wasn’t prosecution of people who were providing protection under other administrations.

How faith communities and US Conference of Catholic Bishops are reacting:

In line with the reaction of communities of faith during other immigration flows due to unrest in Mexico and Central America in the 1980s, some parishes and churches have served as sanctuaries. The U.S. Conference of Catholic Bishops has been very outspoken and critical regarding the Trump administration’s treatment of immigrants.