The Algorithmic Rise of the “Alt-Right” 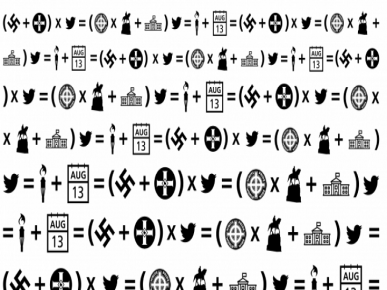 Newswise — On a late summer evening in 2017, members of the far-right descended on Charlottesville, Virginia with tiki-torches held up in defense of confederate general Robert E. Lee’s statue in what was dubbed a “Unite the Right” rally, which had been organized mostly online. The next day, August 13, White nationalists rallied again and violently clashed with counter protestors. One drove his car into a multiracial crowd, killing one and seriously injuring 19 others. As it has turned out, the events in Charlottesville were a watershed moment in the algorithmic rise of White nationalism in the U.S.

White nationalism has gone “from being a conversation you could hold in a bathroom, to the front parlor,” according to William H. Regnery II. A multimillionaire, Regnery has spent a significant sum of his inherited wealth pushing his “race realist” agenda via a publishing house and the National Policy Institute, a think-tank. When his protégé and grantee, Richard Spencer, coined the new term “alt-right” in 2008, few took notice. Back then, Jared Taylor, publisher of the White nationalist site American Renaissance, said he thought of his own efforts as “just making a racket,” but now he sees himself as part of an ascendant social movement, with Spencer in a lead role. He, along with Jason Kessler, helped organize the rally in Charlottesville.

The rise of the alt-right is both a continuation of a centuries-old dimension of racism in the U.S. and part of an emerging media ecosystem powered by algorithms.

“I think Tuesday was the most important day in the White nationalist movement,” Derek Black told a New York Times reporter. Black, a former White nationalist, was referring to the Tuesday following the Charlottesville rally, when the current occupant of the White House repeated White nationalist talking points defending the statues of America’s founding slaveholders. In that New York Times interview, Black went on to describe his shock, “… Tuesday just took my breath away. I was sitting in a coffee shop and I thought the news from this was done when I read that he had come back and he said there were good people in the White nationalist rally and he salvaged their message.” It’s certainly not the first time that a sitting president has openly heralded White supremacy from the oval office, but it is the first time that the ideology of White supremacy from both extreme and mainstream sources has been spread through the algorithms of search engines and social media platforms.

There are two strands of conventional wisdom unfolding in popular accounts of the rise of the alt-right. One says that what’s really happening can be attributed to a crisis in White identity: the alt-right is simply a manifestation of the angry White male who has status anxiety about his declining social power. Others contend that the alt-right is an unfortunate eddy in the vast ocean of Internet culture. Related to this is the idea that polarization, exacerbated by filter bubbles, has facilitated the spread of Internet memes and fake news promulgated by the alt-right. While the first explanation tends to ignore the influence of the Internet, the second dismisses the importance of White nationalism. I contend that we have to understand both at the same time.