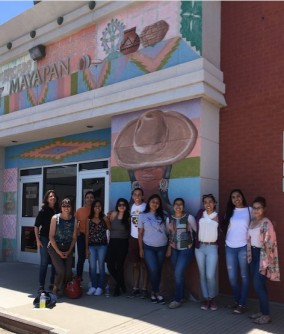 Newswise — Using field notebooks and their eyes and ears, undergraduate students from New Mexico State University have partnered with the University of Texas at El Paso and five other universities under a three-year grant from the National Science Foundation. The project, which began in May, allows students to get firsthand experience in qualitative research.

The focus of this team has been immigration policies on the U.S./Mexico border.

“NSF offers many of these around the country with the overall goal of encouraging undergraduate students to get hands-on experience in the discipline they are studying including the social sciences,” said Neil Harvey, NMSU government professor and department head in the College of Arts and Sciences.

Harvey and University of Texas at El Paso Professor Jeremy Slack are co-principal investigators for the NSF Research Experience for Undergraduates grant. The grant funds 10 undergraduates for 10 weeks over the summer to learn social science research methods to conduct in-depth research in border communities along the Texas/New Mexico border.

Three NMSU students and two UTEP students along with students from Colby College in Maine, Vassar in upstate New York, Brown University in Rhode Island, the University of California, Berkeley, and the University of Arizona round out the group of undergraduates engaged in border research from late May through late July.

The students were divided into groups and assigned to different community organizations: The Border Network for Human Rights, the American Civil Liberties Union Regional Center for Border Rights and the Hope Border Institute. They have spent the summer observing public demonstrations, sitting in courtrooms listening to federal immigration cases and some have even traveled to Tornillo, Texas, to the tent city recently erected to detain children separated from their parents during immigration processing at the border.

These students are not only learning research methods but also documenting history in the making.

“We’ve been going to marches, to protests and we’ve been learning about the current issues,” said NMSU government student Mayra Diaz, who will be a senior in the fall. “I’m from here, but I’ve been immune to it. Now I’ve been observing it with a critical lens and I’ve gained knowledge about these issues I didn’t know before.”

Zaira Martin just completed her freshman year at NMSU with support from the College Assistance Migrant Program for farm worker families. She began college with a double major – nursing and Spanish. After this summer research experience she is considering changing her major to government.

“I’ve been working with the ACLU in Las Cruces and El Paso,” said Martin. “I have been taking notes in preliminary, initial and sentencing hearings for undocumented immigrants in downtown district courts. Our goal is to come up with a template that we can distribute to the general public to be able to encourage more people to go out and observe these courts on a daily basis.”

The three components of the summer research include workshops, field notes and something practical the students produce that can be used by the partner agencies in the future.

“For example, a manual on how to observe the operations in the courts which deal with undocumented immigrants, their families and their children,” Harvey said. “There are many people interested in documenting this right now, but there’s no manual to it, so the data is not so consistent for those interested in looking for similar patterns or issues that may arise. Something as practical as that could be used after the summer by whichever person or groups would like to use it.”

Harvey says the second group of students will be producing videos about the history of the Border Network for Human Rights, collecting testimonies of those involved in the organization at different times to document its 20th anniversary.

Harvey says training undergraduates in research methods is important for the country’s future.

“We really need a new generation of trained social scientists just as we need trained engineers, scientists in physics or chemistry, computer science in order for the country to have the best possible knowledge base and best-trained work force,” Harvey said. “You can’t get that just by sitting in a classroom, reading books and taking notes. Studies show the more we have experiential learning opportunities for our students, particularly something as complex as immigration issues, the better those students will be once they graduate. They will be more confident, more capable, good at problem solving, good at working in teams and we have students who are bilingual and familiar with politics on both sides of the U.S./Mexico border.”

Mariana Castañon, an NMSU junior and double major in government and psychology, is part of the team of students working on policy issues with the Hope Border Institute.

“Procedural stuff matters,” said Castañon. “It’s research, maybe not so much being out there on the front lines but I’ve learned policy. This is a manmade crisis. I’ve learned what the issues are. As an undergrad, this program is helping me have a better understanding about what research is like, specifically this type of research involving communities. As for a career, it makes me want to be part of the policy making part of it.  I could go to grad school or be a politician. Because I’ve been involved through this program, it makes me someone who is active, someone who cares.”

NMSU graduate student Ricardo Trejo brought his own personal experiences to the students as an assistant in Harvey’s workshops during the course of the program.

“It’s the right time for these students to be experiencing these issues,” said Trejo. “Being in the middle of these events is important so they can see how these immigration issues are playing out. I’m happy to be part of it. My focus as a grad student is on immigration policy. This is a career path I want to take and I hope some of the organizations I am involved with might offer me a job in the future.”

The students involved in this research experience for undergraduates are learning research methods and applying their knowledge for the benefit of community partners, which also can be useful in making the students more marketable as job prospects.

The call for applicants for next summer’s undergraduate research experience will be sent out in mid-November. Interested students can contact Harvey at [email protected].