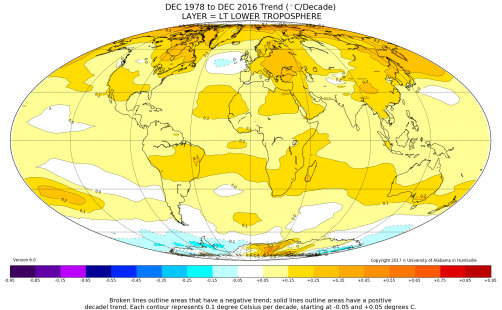 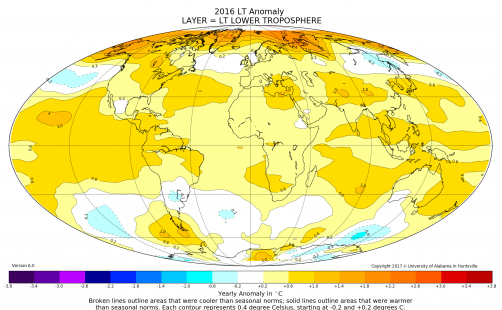 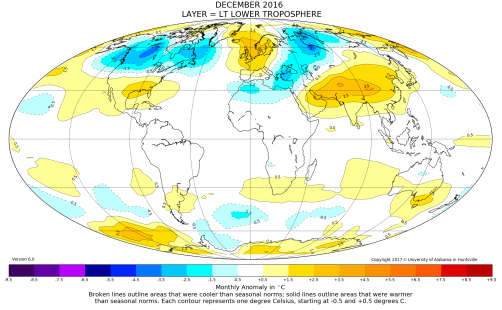 Globally, 2016 edged out 1998 by +0.02 C to become the warmest year in the 38-year satellite temperature record, according to Dr. John Christy, director of the Earth System Science Center at The University of Alabama in Huntsville. Because the margin of error is about 0.10 C, this would technically be a statistical tie, with a higher probability that 2016 was warmer than 1998. The main difference was the extra warmth in the Northern Hemisphere in 2016 compared to 1998.

“The question is, does 2016’s record warmth mean anything scientifically?” Christy said. “I suppose the answer is, not really. Both 1998 and 2016 are anomalies, outliers, and in both cases we have an easily identifiable cause for that anomaly: A powerful El Niño Pacific Ocean warming event. While El Niños are natural climatic events, they also are transient. In the study of climate, we are more concerned with accurately identifying long-term temperature trends than we are with short-term spikes and dips, especially when those spikes and dips have easily identified natural causes.

“Some records catch our attention because we usually struggle to cope with rare events. For example, the Sept.-Nov. record heat and dryness in the southeastern U.S. (now a thing of the past) will be remembered more than the probability that 2016 edged 1998 in global temperatures. So, from the long-term perspective, 2016’s record may be less noteworthy than where the month-to-month temperature settles out between warming and cooling events.”

A paper with the scientific explanations of changes made in creating version 6.0 of the satellite troposphere dataset has been accepted for publication in the Asia-Pacific Journal of Atmospheric Science. The complete version 6 lower troposphere dataset is available here: 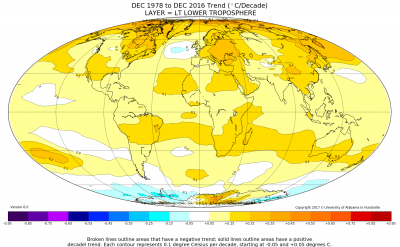 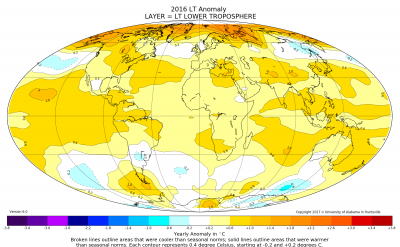 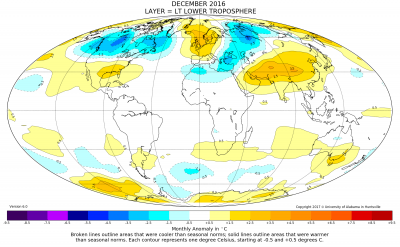