Through a direct-ink writing 3D printing process, LLNL researchers produced several types of structures, including a stent that expanded after being exposed to heat. 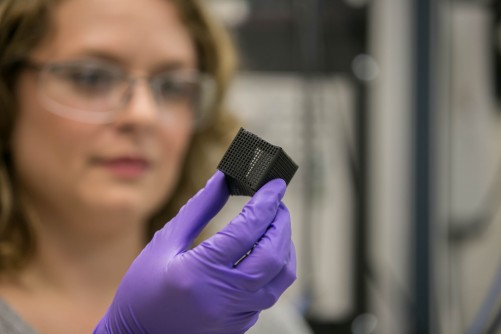 Lab researcher Jennifer Rodriguez examines a 3D printed box that was “programmed” to fold and unfold when heated. 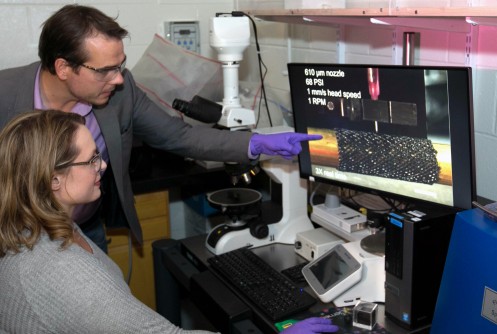 Newswise — A team of Lawrence Livermore National Laboratory researchers have demonstrated the 3D printing of shape-shifting structures that can fold or unfold to reshape themselves when exposed to heat or electricity. The micro-architected structures were fabricated from a conductive, environmentally responsive polymer ink developed at the Lab.

In an article published by the journal Scientific Reports in June, Lab scientists and engineers revealed a strategy for creating boxes, spirals and spheres from shape memory polymers (SMPs), bio-based “smart” materials that exhibit shape-changes when resistively heated or when exposed to the appropriate temperature.

While the approach of using responsive materials in 3D printing, often known as “4D printing,” is not new, LLNL researchers are the first to combine the process of 3D printing and subsequent folding (via origami methods) with conductive smart materials to build complex structures.

In the paper, the researchers describe creating primary shapes from an ink made from soybean oil, additional co-polymers and carbon nanofibers, and “programming” them into a temporary shape at an engineered temperature, determined by chemical composition. Then the shape-morphing effect was induced by ambient heat or by heating the material with an electrical current, which reverts the part’s temporary shape back to its original shape.

“It’s like baking a cake,” said lead author Jennifer Rodriguez, a postdoc in LLNL’s Materials Engineering Division. “You take the part out of the oven before it’s done and set the permanent structure of the part by folding or twisting after an initial gelling of the polymer.”

Ultimately, Rodriguez said, researchers can use the materials to create extremely complex parts.

“If we printed a part out of multiple versions of these formulations, with different transition temperatures, and run it through a heating ramp, they would expand in a segmented fashion and unpack into something much more complex,” she said.

Through a direct-ink writing 3D printing process, the team produced several types of structures -- a bent conductive device that morphed to a straight device when exposed to an electric current or heat, a collapsed stent that expanded after being exposed to heat, and boxes that either opened or closed when heated.

The technology, the researchers said, could have applications in the medical field, in aerospace (in solar arrays or antennae that can unfold), as well as flexible circuits and robotic devices.

“We have these materials with 3D structures but they have extra smart properties; they can retain a memory of the previous structure,” said Lab staff scientist James Lewicki. “It opens up a whole new property set. If you can print with these polymer composites you can build things and electrically activate them to unfold. Instead of a dumb lump, you are left with this sentient, responsive material.”

Others contributing to the paper were Lab scientists and engineers Cheng Zhu, Eric Duoss, Thomas Wilson, and Chris Spadaccini.

Caption: Through a direct-ink writing 3D printing process, LLNL researchers produced several types of structures, including a stent that expanded after being exposed to heat. 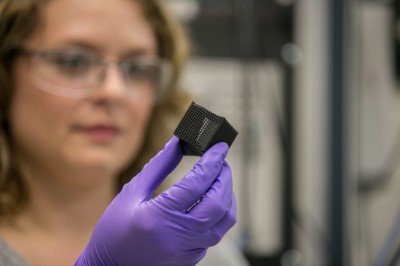 Caption: Lab researcher Jennifer Rodriguez examines a 3D printed box that was “programmed” to fold and unfold when heated. 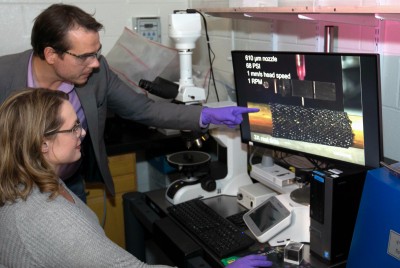