With new treatment, doctors hope to prevent common cause of childhood blindness

Zion Grant's diagnosis with Leber congenital amaurosis would come during a period of hope and progress in the field of gene therapy aimed at curing blindness.

Zion Grant, 7, with his parents after University of Michigan Kellogg Eye Center performs gene therapy to save his eyesight from inherited vision loss. 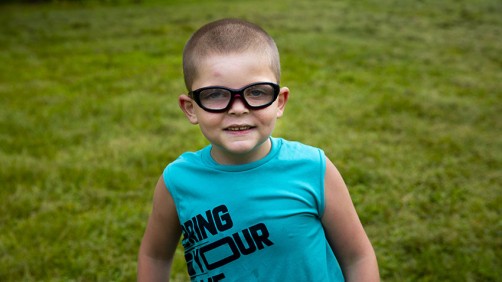 Zion Grant, who was diagnosed with Leber congenital amaurosis, has an eye exam at the University of Michigan Kellogg Eye Center.

Newswise — When Zion Grant was 3 months old his mother Daisy Dodd noticed he wasn’t tracking her with his eyes. Zion would fixate on a light in the room, but not on her face.

Genetic testing confirmed Zion had Leber congenital amaurosis, a rare eye condition that usually starts in childhood and worsens over time. Cells in the eye crucial for vision diminish, and by age 20, most with this form of retinal dystrophy are legally blind.

But Zion’s diagnosis would come during a period of hope and progress in the field of gene therapy aimed at curing blindness.

Progress in treating Leber congenital amaurosis is something physicians and families have long worked for through research and clinical trials.

Leber congenital amaurosis am affects the retina, the tissue in the back of the eye that detects light and color. The condition occurs in 2 to 3 out of 100,000 newborns in the United States, according to the National Institutes of Health.

With the boy’s diagnosis in mind, in 2014, Zion’s family moved from Tennessee to Michigan to establish a relationship with the retinal dystrophy clinic at the University of Michigan Kellogg Eye Center, where clinical trials were underway and new treatments were on the horizon.

Kellogg is one of just 10 centers in the country to offer Luxturna, which in 2017 became the first gene therapy approved by the U.S. Food and Drug and Administration for an inherited disease.

In clinical trials, the treatment produced dramatic results, restoring the ability of patients to see things they couldn’t see before, like stars in the night sky and their parents’ faces.

“Moving back to Michigan and being introduced to the new therapy was a sign that we were in the right place,” says Dodd. “Our care team at Kellogg gave Zion the chance to see like a normal kid again, and we couldn’t be more grateful.”

“These therapies are provided to our youngest patients so they do not have to endure more vision loss later in life,” says Besirli. “For many families, this genetic therapy gives them hope for the future.”

Gene therapy provides a working copy of a gene responsible for producing a protein that makes light receptors work in the eye.

The gene therapy approved by the FDA was developed for those with a mutation in the RPE65 gene. Treatment involves surgery to inject a functioning copy of the gene directly under the retina using a fine needle. Zion received the first injection in early January and the second later that month.

“I knew I had to do what was best for my kid, and giving him the best sight possible was what Zion needed the most,” says Dodd. “That’s why we went forward with the Luxturna treatment.”

Kari Branham, M.S., a genetic counselor at Kellogg, worked with Zion’s family to help them understand the genetic basis for Zion’s condition.

“We have seen such amazing progress with these conditions over the last 15-20 years,” says Branham. “We used to tell patients and their families that we would have to wait and see what happens, but now we can actually do something to help.”

By going through the gene therapy process, Branham says the team is hopeful that this has changed Zion’s prognosis.

The treatment is designed to stop or slow the death of specialized cells in the retina, called photoreceptors, that send visual information to the brain.

“Patients who have Leber congenital amaurosis have night blindness,” says Besirli. “One of the first treatment effects after receiving Luxturna is that (patients) are telling us that they function much better in dark.

“They can play outside much longer, they can navigate around the house and don’t need nightlights anymore and can participate in indoor sports. That’s been a huge change in their lives.”

Seven months after treatment, Zion, now age 7, and his family are back to their normal routine in Montrose, Mich., and monitor his progress during follow-up appointments at Kellogg.

Zion says he’s looking forward to playing football and, with improved vision -- playing outside at night with his brothers.

“We hope that with Zion we have changed the trajectory for him to the point that in his 20s he won’t have significant vision loss we see with him now,” says Branham.

Caption: Zion Grant, 7, with his parents after University of Michigan Kellogg Eye Center performs gene therapy to save his eyesight from inherited vision loss.