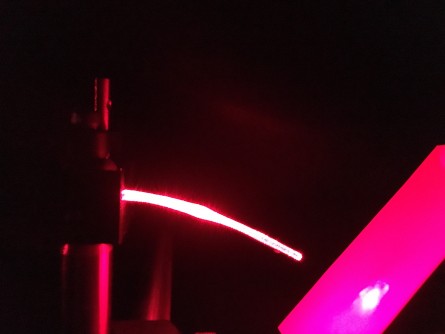 A view of light delivery through a citrate-based optical fiber

Newswise — UNIVERSITY PARK, Pa. -- In Penn State’s Materials Research Institute, an electrical engineer and a biomaterials engineer have joined their expertise to develop a flexible, biodegradable optical fiber to deliver light into the body for medical applications.

The ability to deliver light into the body is important for laser surgery, drug activation, optical imaging, diagnosis of disease and in the experimental field of optogenetics, in which light is used to manipulate the function of neurons in the brain. Yet, delivering light into the body is difficult and typically requires the implantation of an optical fiber made of glass.

“The problem is that visible light can only penetrate to a certain depth, maybe hundreds of microns. Near infrared light might be able to penetrate a few millimeters to a centimeter, but that is not enough to see what is going on,” said Jian Yang, professor of biomedical engineering, Penn State.

Currently, people are using glass fiber to get light into the biological tissue at depth, but glass is brittle and is not biodegradable. It can break and damage tissue if implanted. Researchers are beginning to look toward flexible polymer fibers as a solution. Yang previously invented a polymer based on citrate, a naturally occurring key ingredient in metabolism, that he developed as a general platform for biomedical applications, such as biodegradable bone screws for bone fixation, scaffolds for tissue engineering and nanoparticles for delivering time-released therapeutic drugs. Now, Yang is collaborating with Zhiwen Liu, Penn State professor of electrical engineering, on using Yang’s citrate-based polymer to create a step-index optical fiber for light delivery inside the body.

A step-index fiber has a core material that transmits the light and a cladding that protects the core and keeps the light from escaping. Yang’s lab makes and tests the polymer and then takes it to Liu’s lab to turn into a fiber. Once the fiber is tested and fine-tuned, Yang’s lab implants the fiber in biological tissue for testing.

“The present work demonstrates the first citrate-based flexible biodegradable polymeric step-index fiber,” said Dingying Shan, a Ph.D. student in Yang’s group and co-first author on a recent paper in the journal Biomaterials that describes their work.

“The use of the citrate-based polymers enables ultrafine tuning of refractive index differences between the core and the cladding layers,” added co-first author Chenji Zhang, a recent Ph.D. graduate in Liu’s group.

Because the core and cladding have identical mechanical characteristics, the optical fiber can bend and stretch without the layers pulling apart, as can happen with dissimilar materials. The two materials will also biodegrade at similar rates in the body, without harm.

“We believe this new type of biodegradable, biocompatible and low-loss step-index optical fiber can facilitate organ-scale light delivery and collection. And that it will become an enabling tool for diverse biomedical applications where light delivery, imaging or sensing are desired,” Shan said.

“This new type of fiber creates a transparent window for peeking into a turbid tissue, and can enable new opportunities for imaging,” Liu said. As a preliminary step, the team first measured light propagation characteristics of the fiber and then used this information to demonstrate image transmission through the fiber.

Yang added, “Because the material is nontoxic and biodegradable, the citrate-based fiber could be left inside the body for long periods without the need for a second surgery to remove it. In addition to sensing and imaging, we can add therapeutic chemicals, drugs or biological molecules for disease treatment.”

This work was supported by the National Institutes of Health.