A Series of Rare Heart Surgeries Saved Angelique Garcia; Now She Can Sing, Dance and Visit the Aquarium 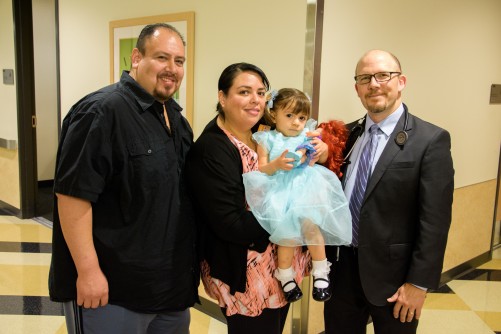 In a normal heart, there are four distinct walled chambers with valves that act as one-way doors to keep blood flowing in one direction:

But in Angelique's heart, those walls and valves had formed abnormally, in essence leaving multiple open doors where blood from all four chambers was mixing and heading the wrong directions:

“The large holes in her heart were causing oxygen-rich blood from the left side of her heart to cross over to the right side, flooding the lungs with excessive blood flow,” Dr. Pruetz explains.

Not only was her oxygen-rich blood diluted with oxygen-poor blood, it was moving very inefficiently, like multiple cars trying to simultaneously pass through an unprotected intersection with no traffic signs. In addition, Angelique was found to have a complicating condition – dysplastic left side valve leaflet with a severe leakage (mitral regurgitation) – where blood heading to her lungs was leaking backwards into her heart, further hindering blood from reaching her body effectively.

As a result, Angelique's heart was overworking itself and would fail if left untreated.

Initially after birth, Angelique was monitored by CHLA cardiologists and she weathered the heart condition with help from medication, but within weeks, her mother Maria noticed her newborn was struggling to eat and not growing well. “When she was a baby, she would have trouble finishing her bottle,” recalls Maria. Because of the excessive blood flow to the lungs, they could not function properly due to this extra fluid called pulmonary edema. Her heart was also working extra hard, causing damage.  Medications were started to help clear her lungs so that she could breathe easier, but Angelique’s heart failure continued to advance rapidly despite maximal medical therapy. At three months, she was hospitalized and the condition causing her blood to leak backwards into her heart was getting worse. To save her, CHLA cardiothoracic surgeons performed open heart surgery several times that week, employing several different procedures. 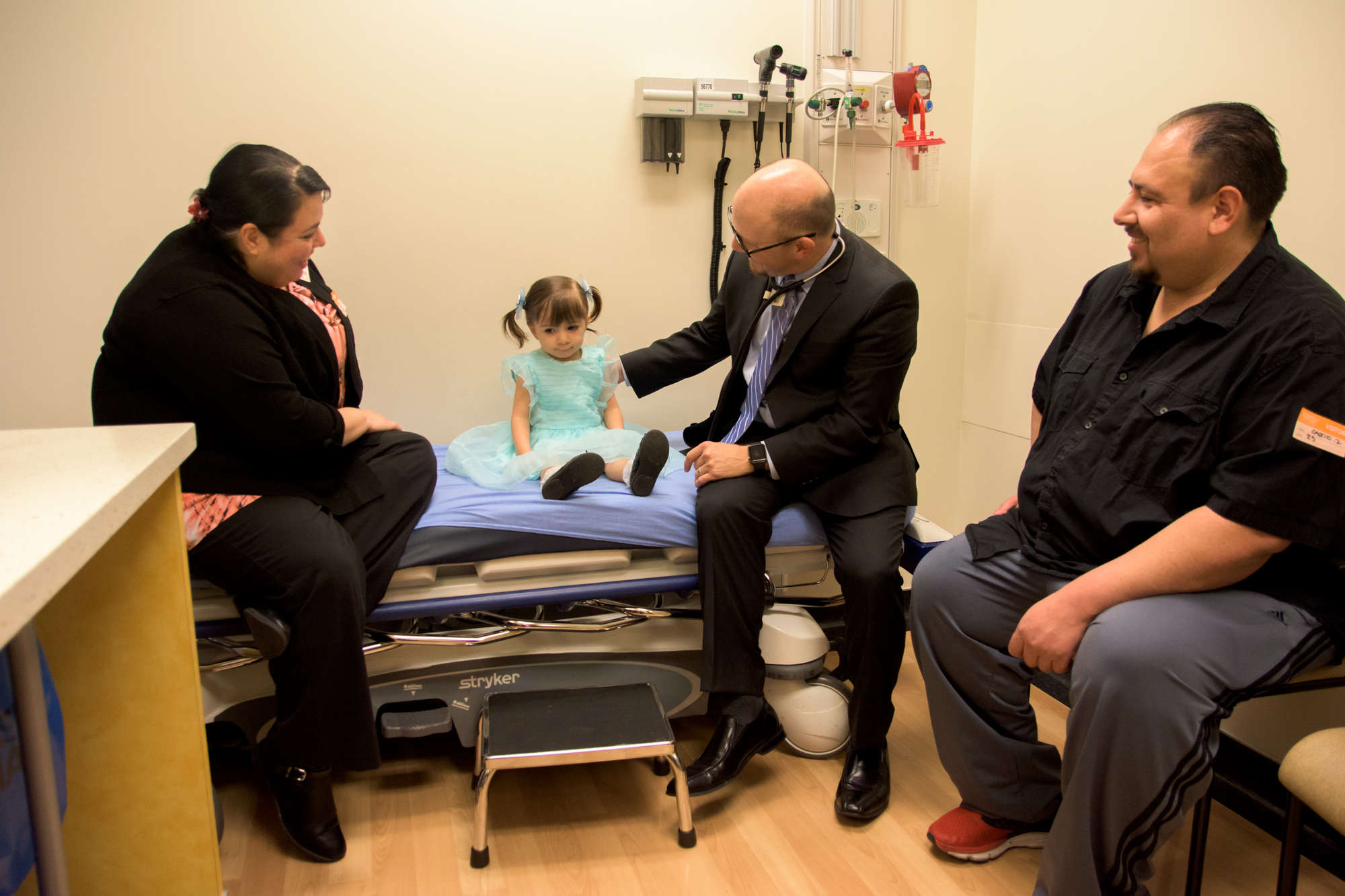 “Had we had her 10 years ago, she probably wouldn’t have had a chance,” says Luis Garcia, Angelique’s father.”

Her unusual heart condition accounts for about 5 percent of children born with congenital heart defects, but CHLA’s Heart Institute was uniquely staffed to perform the surgery that would ultimately save her life - a unique hybrid heart procedure that required the skills of both a cardiothoracic surgeon and a pediatric interventional cardiologist. Initially, on Feb. 16, 2016, CHLA physicians attempted complete AV Canal repair on 3-month old Angelique’s failing heart, which was saddled with three separate holes, according to her dad. The complications persisted after the surgery, as Angelique continued to suffer severe mitral regurgitation, a condition so critical Angelique could not be weaned off the ventilator. Again and again, surgeons went back to the operating table to stabilize Angelique but they failed to stop the leakage, and her life hung in the balance.

It was a traumatic time for the Garcia's, who stayed at Angelique’s bedside in the hospital’s cardiothoracic intensive care unit, which like most rooms at the hospital, is outfitted with a convertible bed for family members. “I appreciated having access to a chaplain and Child Life services, and Angelique enjoyed the therapy dogs to help with the stressful situation,” Maria said. Luis and Maria felt the care and surgical teams included them in every step of the process. “They would invite us to join the morning walkthroughs as the doctors would invite us to come in and listen to them and hear what they had to say, and they also took our opinions into consideration,” says Luis.

Maria also appreciated the staff allowing the family to participate in post-op care. “They involved us in her healing process as well… having us give her a bath as opposed to just sitting back and letting them do everything, they were really teaching us how to continue the healing process at home.”

Getting there would be a challenge. Nearly out of options, CHLA’s surgeons proposed a rare operation to the Garcia’s which the hospital had never tried before - a Melody valve or Bio prosthetic valve replacement on Angelique’s heart. Although it is normally used to replace the pulmonary valve, the Melody valve was used by doctors in this instance as an off label mitral valve replacement. The procedure had several benefits, explained Pruetz, director of CHLA’s Fetal Cardiology Program and Angelique’s physician:

The team decided on using a Melody valve because despite not knowing how long the valve would last, they felt that its ability to be expanded as the child grew was worth the risk if the operation was successful. Children whose atrioventricular canal is not amenable to surgical repair need valve replacement. And Up until now, this was near impossible for younger or smaller children.

“Seeing your child with their heart open for the whole week, her chest splayed open… it’s heartbreaking to just watch her like that, wishing you would be going through that instead of her,” Luis recalled

“You just want to take all the pain away,” Maria said. “It was very stressful and at times, we did break down. We just continued communicating with each other and having faith in God and having faith in our doctors and nurses, medical team, everyone.”

This 2-hour surgery on 3-month old Angelique took place on Feb. 19, 2016, four days after the initial open heart surgery and required both a heart surgeon and an interventional cardiologist to deploy the Melody valve, which came from a pig. After the child was placed on a heart-lung bypass machine, CHLA cardiothoracic surgeon Richard Kim opened the child’s chest and pediatric interventional cardiologist Frank Ing implanted the valve through a catheter inserted through the baby’s thigh. Once in place, the valve was open expanded using a balloon to 12 mm, with a capability of expanding to 16 mm. Kim then sewed the valve to the heart canal. This unique Melody valve replacement procedure was a first for CHLA and likely for the entire western U.S. The only other hospital that had performed the surgery was Boston Children’s.

The valve proved its worth immediately as Angelique started to grow (she is now in the 4th percentile compared to 0 percentile a year before) within months of the procedure. Almost, instantly Luis and Maria noticed a change in Angelique’s appetite. “She took to her bottle,” Maria said. “I’m very grateful for it, the technology, the advances, and the doctors, everything, it helped save her life. It helped improve the quality of her life and continues to do so.”

Almost a year later in January 2017, Dr. Ing and his team were able to perform a minimally invasive catheter procedure that expanded the valve from 12 to 14 millimeters. This was done without having to open the child’s chest back up. “Yeah, having three holes in your heart, it’s kind of, like, crazy to think about it now,” says Luis. “Now that that’s been repaired, it’s kind of easing to know that she has something in place and not have to worry as much about that.”

Today, Angelique is an active 2-year-old who enjoys singing and visits to the aquarium. Luis says more surgeries lie ahead for his daughter. She will eventually need a replacement Melody valve, but they are hopeful she will be bigger and stronger to withstand  additional operations, including eventual mitral valve replacement surgery. “We’ll be in good hands here,” Maria said.

About Children's Hospital Los Angeles
Children's Hospital Los Angeles has been ranked the top children's hospital in California and sixth in the nation for clinical excellence with its selection to the prestigious U.S. News & World Report Honor Roll. CHLA is home to The Saban Research Institute, one of the largest and most productive pediatric research facilities in the United States. Children's Hospital is also one of America's premier teaching hospitals through its affiliation with the Keck School of Medicine of the University of Southern California since 1932. For more information, visit CHLA.org. Follow us on Twitter, Facebook, YouTube, LinkedIn and Instagram, and visit our child health blog (CHLA.org/blog) and our research blog (ResearCHLABlog.org).