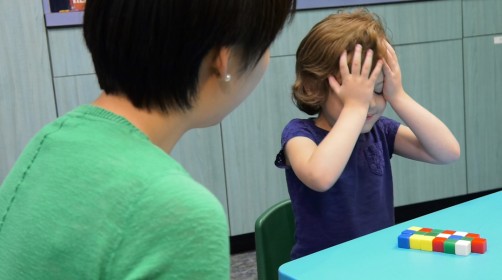 Video here; raw video and soundbites for media use here

“Math ability is not static—it’s not the case that if you’re bad at math, you’re bad at it the rest of your life. It’s not only changeable, it can be changeable in a very short period of time,” said Jinjing “Jenny” Wang, a graduate student in the Krieger School of Arts and Science’s Department of Psychological and Brain Sciences. “We used a five-minute game to change kids’ math performance.”

The findings, due to appear in the July issue of the Journal of Experimental Child Psychology, are now available online.

Humans and animals are born with an intuitive sense of quantities and can demonstrate this knowledge as infants. For instance, when presented with a choice between a plate with a few crackers and another with more of them, even a baby will gravitate to the option with more. This intuition about numbers is called the “approximate number system.”

Although this primitive sense of number is imprecise, and therefore quite different than the numerical exactitude of mathematics, studies have shown the two abilities are linked. For instance, researchers from this same Johns Hopkins research group have demonstrated that a strong early gut sense of approximate number can predict math ability later when a child attends school. But until now, no one has shown that grooming that gut sense could make a child better at math.

“That’s the big question,” Wang said. “If we can improve people’s intuitive number ability, can we also improve their math ability?”

The researchers created a five-minute computer game to train the intuitive number sense of 40 five-year-olds. Blue dots and yellow dots flashed on a laptop screen; the children were asked to indicate whether there were more blue ones or more yellow ones – and to do so quickly, without counting. Children received feedback after each trial. After correct responses, a pre-recorded voice told them, “That’s right.” After wrong answers, they heard, “Oh, that’s not right.”

After the dots game, the researchers gave all of the children a vocabulary quiz or a math quiz. With the math quiz, derived from a standardized math ability assessment test, the kids were asked to count backward, to judge the magnitude of spoken numbers (“Which is more, 7 or 6?”), to calculate answers to word problems (“Joey has one block and gets two more; how many does he have?”), and to write down numbers.

Though researchers detected no change in any of the children’s vocabulary skills, the kids who performed the dots game in the proper training fashion — easiest to hardest — scored much higher on the math test, getting about 80 percent of the answers correct.

The kids given the hardest dot questions first got just 60 percent of the math test right, while the control group kids who got the mix of easy and hard questions got scored about a 70 percent.

It was clear that improving the children’s number sense with the game helped their math scores, at least in the short term, said Lisa Feigenson, professor of psychological and brain sciences and a senior author of the study. The next step will be to figure out if there’s a way to use the technique for lasting results.

“These findings emphasize the sense in which core cognition, seen across species and across development, serves as a foundation for more sophisticated thought,” Feigenson said. “Of course, this raises the question of whether this kind of rapid improvement lasts for any significant duration, and whether it enhances all types of math abilities. We're excited to follow up on these questions.”

The research team also included Darko Odic, a former graduate student in psychology, and Justin Halberda, a professor of psychological and brain sciences, both at Johns Hopkins.

This research was supported by National Institutes of Health grant R01 HD057258.