Aliens Are Among Us. We Just Can’t See Them: Rutgers Expert on Possible Rock Breathing “Martians”

Aliens Are Among Us. We Just Can’t See Them: Rutgers Expert on Possible Rock Breathing “Martians”

New Brunswick, N.J. (Oct. 28, 2019) –From the monsters of the Aliens films to the Killer Klowns from Outer Space, science fiction has never failed to highlight terrifying depictions of extraterrestrials. Rutgers scholar Nathan Yee says if aliens do exist, they are not likely to be flesh-eating monsters, but will likely do fascinating things worthy of sci-fi flicks -- like breathe rocks on Mars."

Yee said the probability of finding extraterrestrial life may be higher on moons in our galaxy, due to signs of water.

“In science fiction, there is a lot of effort put into searching for signs of life like plants, animals and organisms that look like us. But there is a higher probability that alien life will be at the microscopic level. That fact is so much more interesting when you consider what the earliest lifeforms on Earth were capable of doing. All things eat and breathe, and when you remove oxygen, like on ancient Earth or Mars atmospheres, there are microbes that have figured out ways to breathe other things, like iron found inside of rocks,” said Yee, who co-created and teaches Rutgers first course on Astrobiology.

Yee said the probability of finding extraterrestrial life may be higher on moons in our galaxy, due to signs of water.

“Everywhere there is liquid water on Earth, we’ve found microbial life. We are smart enough to know that if a world has oceans, then we should look there for alien microbes. Europa, which is one of Jupiter’s moons, has what appears to be global oceans under sheets of ice. Saturn’s moon Enceladus has geysers and hot springs spewing from its south pole. That points to the possibility of volcanoes and hydrothermal vents, which on Earth harbor ancient life forms and may have contributed to the origin of life here. Now, do I think there’s going to be a whale on these moons? Likely not, but it is possible that alien microbes have evolved and continue to live there.”

Yee, a professor of geomicrobiology and geochemistry at Rutgers–New Brunswick’s Department of Earth and Planetary Sciences is a co-investigator at Rutgers ENIGMA, a NASA-funded research team focused on discovering how proteins evolved to become the catalysts of life on Earth.

He can be reached by contacting Cynthia Medina at [email protected]. 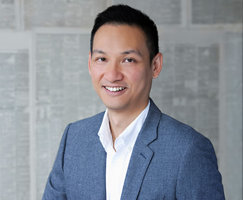 Caption: Nathan Yee, a professor of geomicrobiology and geochemistry at Rutgers–New Brunswick’s Department of Earth and Planetary Sciences

Caption: Nathan Yee, a professor of geomicrobiology and geochemistry at Rutgers–New Brunswick’s Department of Earth and Planetary Sciences