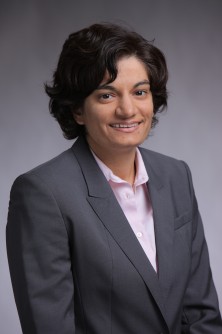 Uzma Samadani, MD, PhD, assistant professor at NYU Langone Medical Center and its Steven and Alexandra Cohen Veterans Center, has led research that concludes that subdural hemorrhage could become the most common neurosurgical procedure by 2030.

Newswise — (New York, NY) -- By 2030, chronic subdural hemorrhage (SDH) will be the most common adult brain condition requiring neurosurgical intervention in the U.S., according to a new study conducted by researchers at NYU Langone Medical Center. And hospitals and neurosurgeons may be under-manned to handle the projected onslaught of patients.

The researchers are publishing their findings March 20 online in the Journal of Neurosurgery.

SDHs are also more common in military veterans and in people with a history of alcohol abuse.

While clinicians know that certain populations have a greater likelihood of SDHs, precise incidence rates in the United States are unknown.

Research led by Uzma Samadani, MD, PhD, chief of neurosurgery at New York Harbor Health Care System and assistant professor in the Departments of Neurosurgery, Psychiatry, Neuroscience and Physiology at NYU Langone, sought to quantify the future incidence rates for chronic SDH in U.S. Veterans Administration (VA) and civilian populations. They looked at current data from VA hospital visits where SDHs were diagnosed, as well as civilian incidence rates from Finland and Japan where accurate incidence records are available to create a mathematical model. This model, which accounted for age, gender and alcohol consumption, was designed to predict the incidence of SDH that would occur from 2012-2040 as the population ages.

Records from VA hospital visits from 2000-2012 showed that 695 new SDHs were identified, with 29% of these cases requiring a surgical drainage procedure. This translated to 79.4 SDHs per 100,000 veterans. In addition, more than 70% of SDHs occurred in patients 65 years of age and older. Based on this information, Dr. Samadani and her team determined that by 2030, when the U.S. population has aged to the extent that as many as 25% of people will be older than 65, the incidence of chronic SDH will reach approximately 121.4 cases per 100,000 people in the VA population and 17.6 cases per 100,000 people in the general U.S. population.

“This study suggests that the medical community, particularly those caring for our aging veterans, may need to dedicate more healthcare resources for the prevention and management of SDH,” says Dr. Samadani, who is also co-director of the Steven and Alexandra Cohen Veterans Center for the Study of Post-Traumatic Stress and Traumatic Brain Injury at NYU Langone. “In 15 years, drainage for SDH will likely be the most common type of adult brain surgery performed, surpassing the number of operations required for brain tumors. If we can identify patients at risk and prevent brain atrophy from occurring as Americans age, we may be able to slow this trend. If not, we are going to need increased neurosurgical and rehabilitation capacity to manage these patients.”

SDH surgical patients also are more likely to have lengthy hospital stays as determined by an assessment of patients treated for SDHs at the New York Harbor VA during 2008-2010, which showed that SDH patients were in the hospital significantly longer than patients being surgically treated for brain tumors. The SDH patients tended to require more intensive physical therapy and rehabilitation than other cranial surgery patients.

Dr. Samadani adds: “We have a very large population of elderly and the last of the 77 million baby boomers will have turned 65 by 2030. We can anticipate that 60,000 Americans per year will develop chronic SDHs. Knowing what is ahead of us gives us time to prepare.”

In addition to Dr. Samadani, co-authors of this study include: David Balser, BS; Sameer Farooq; Talha Mehmood, MD; and Marleen Reyes, BA. Dr. Samadani’s research is supported by the U.S. Department of Veterans Affairs, Veterans Health Administration, Office of Research and Development, Clinical Science Research and Development via the VA Merit Award (1101CX000887-01A1) and by the Steven and Alexandra Cohen Veterans Center for the Study of Post-Traumatic Stress and Traumatic Brain Injury. Mr. Balser was the recipient of an American Heart Association medical student research fellowship for this study.