An innovative and non-destructive strategy to analyse material from Mars 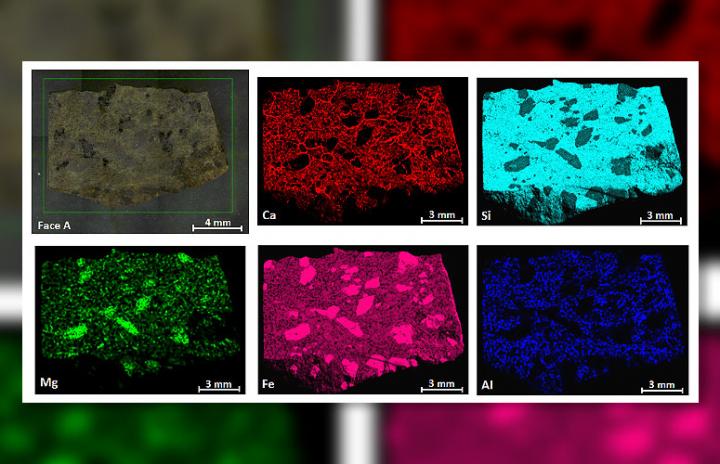 Newswise — The IBeA research group from the University of the Basque Country's Department of Analytical Chemistry, Faculty of Science and Technology, is participating in NASA's Mars2020 space mission, which is scheduled to touch down on Mars in February this year. Specifically, the group has participated in constructing and verifying the chemical homogeneity of the templates included on the calibration card of the SuperCam instrument mounted on the Perseverance. 'We made a set of pads perfectly characterised in accordance the instruments we have here, in order to enable us to verify that the LIBS and Raman spectroscopy measurements taken by the SuperCam are correct,' explains Doctor Cristina García-Florentino. 'Raman spectroscopy is a technique for determining the molecular composition of unknown samples,' she continues. 'In other words, not only can we determine, for example, whether the sample contains calcium or iron, etc., we can also identify the molecular form in which they are present. Thus, we can see whether they contain calcite or gypsum, for example. We can determine the geochemical composition of the planet'.

At the same time, the research group is also working on characterising meteorites, with a twofold objective: 'Firstly, to get ready for the information that may be sent from Mars by the Perseverance rover; and secondly, to develop non-destructive analytical strategies for characterising Martian samples from the return mission (Mars Sample Return mission) when it reaches Earth'. To date, Martian meteorites have been the only Martian samples available for developing different analysis methods. In a recent study, the group has proposed an innovative non-destructive analytical strategy that could be added to the current arsenal of fast analysis techniques which can be used with future samples.

To demonstrate its capabilities, the group has used their analytical proposal to 'characterise the Martian meteorite Dar al Gani 735, with the aim of identifying the terrestrial and non-terrestrial alterations suffered by it, as a very valuable complementary methodology to the more traditional petrographic analyses,' explains Dr García-Florentino.

In the researcher's opinion, 'this study demonstrates the potential of Raman spectroscopy as a key technique in the new upcoming explorations of Mars materials by the Rosalind Franklin rover (the ESA's Exomars2022 mission) and the Perseverance rover (NASA's Mars2020 mission), on which Raman spectrometers will be mounted for the first time in an extra-terrestrial research mission in the field'. According to Dr García-Florentino, the technique is important 'because, once we have samples brought back directly from Mars, we cannot destroy them to analyse them in the initial stages of study. It is therefore important to be ready for when the Martian samples arrive, in order to gain as much information from them as possible, with the fewest possible errors and trying to destroy them as little as possible'.

Nevertheless, the researcher warns that access to the information and to the samples themselves will be difficult: 'We still do not know whether we will be granted access to the samples, whether they will allow us to analyse them as we propose here with the techniques we have developed'. Meanwhile, the IBeA group will continue its work, 'because each meteorite is a world unto itself; each meteorite is totally different from all others'.