Although sound is invisible, evidence suggests its complex properties can easily lead to ‘supernatural’ auditory illusions that correspond to depictions in prehistoric cave art 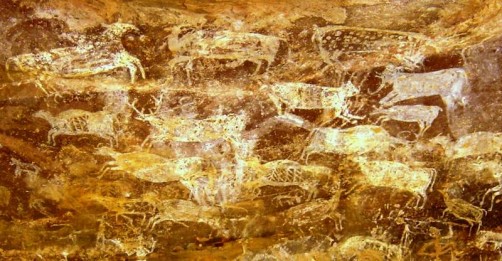 Prehistoric paintings of hoofed animals in a cave with thunderous reverberations located in Bhimbetka, India.

Newswise — WASHINGTON, D.C., October 28, 2014 – Some of mankind’s earliest and most mysterious artistic achievements—including prehistoric cave paintings, canyon petroglyphs and megalithic structures such as Stonehenge—may have been inspired by the behaviors of sound waves being misinterpreted as “supernatural.”

During the 168th Meeting of the Acoustical Society of America (ASA), to be held October 27-31, 2014 at the Indianapolis Marriott Downtown Hotel, Steven J. Waller, of Rock Art Acoustics, will describe several ways virtual sound images and absorbers can appear supernatural.

“Ancient mythology explained echoes from the mouths of caves as replies from spirits, so our ancestors may have made cave paintings in response to these echoes and their belief that echo spirits inhabited rocky places such as caves or canyons,” explained Waller.

Just as light reflection gives an illusion of seeing yourself duplicated in a mirror, sound waves reflecting off a surface are mathematically identical to sound waves emanating from a virtual sound source behind a reflecting plane such as a large cliff face. “This can result in an auditory illusion of somebody answering you from within the rock,” Waller said.

Echoes of clapping can sound similar to hoof beats, as Waller pointed out, while multiple echoes within a cavern can blur together into a thunderous reverberation that mimics the sound of a herd of stampeding hoofed animals.

“Many ancient cultures attributed thunder in the sky to ‘hoofed thunder gods,’ so it makes sense that the reverberation within the caves was interpreted as thunder and inspired paintings of those same hoofed thunder gods on cave walls,” said Waller. “This theory is supported by acoustic measurements, which show statistically significant correspondence between the rock art sites and locations with the strongest sound reflection.”

Other acoustical characteristics may have also been misinterpreted by ancient cultures unaware of sound wave theory. Waller noticed a resemblance between an interference pattern and Stonehenge, so he set up an interference pattern in an open field with just two flutes “droning the same note” to explore what it would sound like.

“The quiet regions of destructive sound wave cancellation, in which the high pressure from one flute cancelled the low pressure from the other flute, gave blindfolded subjects the illusion of a giant ring of rocks or ‘pillars’ casting acoustic shadows,” Waller said.

He traveled to England and demonstrated that Stonehenge does indeed radiate acoustic shadows that recreate the same pattern as interference. “My theory that musical interference patterns served as blueprints for megalithic stone circles—many of which are called Pipers’ Stones—is supported by ancient legends of two magic pipers who enticed maidens to dance in a circle and turned them all into stones,” Waller noted.

There are several important implications of Waller’s research. Perhaps most significantly, it demonstrates that acoustical phenomena were culturally significant to early humans—leading to the immediate conclusion that the natural soundscapes of archaeological sites should be preserved in their natural state for further study and greater appreciation.

“Even today, sensory input can be used to manipulate perception and lead to illusions inconsistent with scientific reality, which could have interesting practical applications for virtual reality and special effects in entertainment media,” Waller said. “Objectivity is questionable, because a given set of data can be used to support multiple conclusions.”

The history of humanity is full of such misinterpretations, such as the visual illusion that the sun moves around the earth. “Sound, which is invisible and has complex properties, can easily lead to auditory illusions of the supernatural,” he added. “This, in turn, leads to the more general question: what other illusions are we living under due to other phenomena that we are currently misinterpreting?”

Presentation #2aAA11, “Virtual sound images and virtual sound absorbers misinterpreted as supernatural objects,” by Stephen J. Waller will take place on Tuesday, October 28, 2014 at 11:40 AM in Marriott 7/8. The abstract can be found by searching for the presentation number here: https://asa2014fall.abstractcentral.com/planner.jsp

ABOUT THE MEETINGThe 168th Meeting of the Acoustical Society of America (ASA) will be held October 27-31, 2014, at the Indianapolis Marriott Downtown Hotel. It will feature more than 1,100 presentations on sound and its applications in physics, engineering, and medicine. Reporters are invited to cover the meeting remotely or attend in person for free. PRESS REGISTRATIONWe will grant free registration to credentialed journalists and professional freelance journalists. If you are a reporter and would like to attend, contact Jason Bardi ([email protected], 240-535-4954), who can also help with setting up interviews and obtaining images, sound clips, or background information.

168th Meeting of the Acoustical Society of America