Newswise — ATLANTA—Animal-assisted therapy can reduce symptoms of anxiety and loneliness among college students, according to researchers at Georgia State University, Idaho State University and Savannah College of Art and Design. Their findings are published in the latest issue of the Journal of Creativity in Mental Health.

The researchers provided animal-assisted therapy to 55 students in a group setting at a small arts college in the Southeast. They found a 60 percent decrease in self-reported anxiety and loneliness symptoms following animal-assisted therapy, in which a registered therapy dog was under the supervision of a licensed mental health practitioner.

Eighty-four percent of the participants reported their interaction with the therapy dog, Sophie, was the most significant part of the program.

The group sessions were held twice monthly during an academic quarter. Students were invited to stop by and interact with the therapy dog as long as they wished, up to two hours. They were allowed to pet, hug, feed, brush, draw, photograph, sit near and play fetch with the therapy dog.

Dr. Leslie Stewart of Idaho State, who led the study, began the research as a Ph.D. student at Georgia State. She collaborated with Drs. Franco Dispenza, Lindy Parker and Catherine Chang of Georgia State and Ms. Taffey Cunnien of Savannah College of Art and Design.

The prevalence of anxiety and loneliness on college campuses has increased, placing extra demands on college counseling centers. Budget strains have made it necessary for these centers to find creative ways to meet the needs of their students.

“College counseling centers are also becoming more and more reflective of community mental health agencies,” Dispenza said. “That’s something that’s been noted in the field in probably the last 10 to 15 years. College counseling centers aren’t seeing students struggling with academics, which major to pick or how to study. They’re coming in with post-traumatic stress disorder, anxiety disorders, pervasive mood disorders and considerable contextual strains that are happening out in the world, such as poverty and experiences of homelessness, as well as a history of medical issues and family health issues.”

To become a registered therapy dog, the animal and handler must complete a series of evaluations and courses, which involve their grooming, temperament, previous training and relationship with their handler. Dogs can be ideal therapy animals because they have become so domesticated and the seeming ability to read cues between dogs and humans is probably the most pronounced. For instance, a dog can tell when a human is sad, Dispenza said.

“The presence of a therapy dog facilitates a therapeutic connection between the client and the mental health professional,” Parker said. “When you’re trying to do mental health work with someone, establishing that therapeutic relationship and rapport is so important. Any way to do it faster or more effectively only helps facilitate the therapeutic process.” 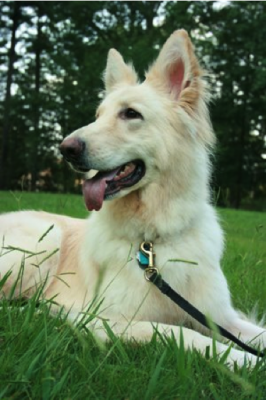 Caption: Sophie, a German Shepherd, is a trained therapy dog. 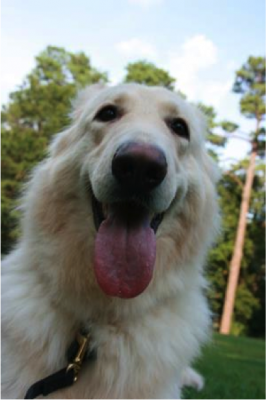 Caption: Sophie, a German Shepherd, is a trained therapy dog.

Journal of Creativity in Mental Health