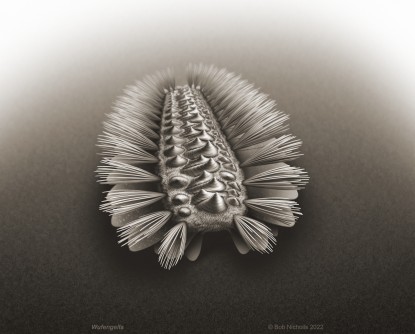 A reconstruction of how Wufengella would have looked like in life. 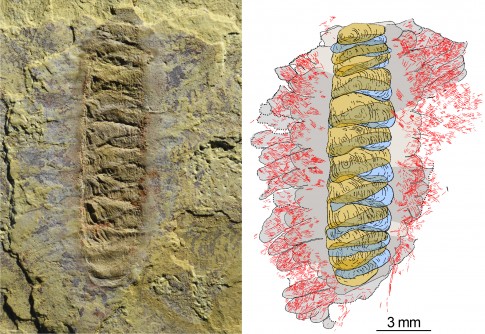 The fossil Wufengella and a drawing outlining the major components of the organism. 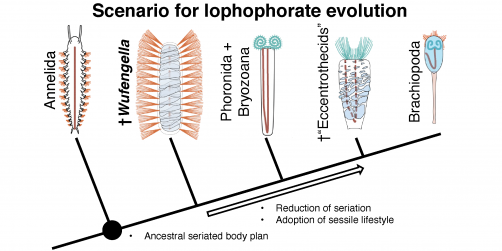 A schematic outline of how tommotiids tell us about the evolution of body plans across the tree of Life.

Newswise — An international team of scientists, including from the Universities of Bristol and Oxford, and the Natural History Museum, have discovered that a well-preserved fossilised worm dating from 518-million-years-ago resembles the ancestor of three major groups of living animals.

Measuring half-an-inch long, the fossil worm – named Wufengella and unearthed in China, was a stubby creature covered in a dense, regularly overlapping array of plates on its back, belonging to an extinct group of shelly organisms called tommotiids.

Surrounding the asymmetrical armour was a fleshy body with a series of flattened lobes projecting from the sides. Bundles of bristles emerged from the body in between the lobes and the armour. The many lobes, bundles of bristles and array of shells on the back are evidence that the worm was originally serialised or segmented, like an earthworm.

The findings are reported today in the journal Current Biology. Study co-author, Dr Jakob Vinther from the University of Bristol’s School of Earth Sciences, said: “It looks like the unlikely offspring between a bristle worm and a chiton mollusc. Interestingly, it belongs to neither of those groups.”

The animal kingdom consists of more than 30 major body plans categorised as phyla. Each phylum harbours a set of features that set them apart from one another. Only a few features are shared across more than one group, which is a testament to the very fast rate of evolution during which these major groups of animals originated, called the Cambrian Explosion, about 550 million years ago.

Brachiopods are a phylum that superficially resemble bivalves (such as clams) in having a pair of shells and living attached to the seafloor, rocks or reefs. However, when looking inside, brachiopods reveal themselves to be very different in many respects. In fact, brachiopods filter water using a pair of tentacles folded up into a horseshoe-shape organ.

Such an organ is called a lophophore and brachiopods share the lophophore with two other major groups called the phoronids (“horseshoe worms”) and bryozoans (“moss animals”). Molecular studies – which reconstruct evolutionary trees using amino acid sequences – agree with anatomical evidence that brachiopods, bryozoans and phoronids are each other’s closest living relatives, a group called Lophophorata after their filter-feeding organ.

Co-author Dr Luke Parry from the University of Oxford added: “Wufengella belongs to a group of Cambrian fossils that’s crucial for understanding how lophophorates evolved. They’re called tommotiids, and thanks to these fossils we have been able to understand how brachiopods evolved to have two shells from ancestors with many shell-like plates arranged into a cone or tube.

“We have known for a long time about this tommotiid group called camenellans. Palaeontologists have thought that those shells were attached to an agile organism—crawling around—rather than being fixed in one place and feeding with a lophophore.”

The team, which consists of palaeontologists from the University of Bristol, Yunnan University, the Chengjiang Museum of Natural History, University of Oxford, the Natural History Museum in London and the Muséum national d’Histoire Naturelle in Paris, demonstrate that Wufengella is a complete camenellan tommotiid, which means that reveals what the long sought-after wormy ancestor to lophophorates looked like.

Dr Parry added: “When it first became clear to me what this fossil was that I was looking at under the microscope, I couldn’t believe my eyes. This is a fossil that we have often speculated about and hoped we would one day lay eyes on.”

While the fossil fulfils the palaeontological prediction that the lophophorates’ ancestral lineage was an agile, armoured worm, the appearance of its soft anatomy brings into focus some hypotheses about how lophophorates may be related to segmented worms.

Dr Vinther said: “Biologists had long noted how brachiopods have multiple, paired body cavities, unique kidney structures and bundles of bristles on their back as larvae. These similarities led them to notice how closely brachiopods resemble annelid worms.”

“We now can see that those similarities are reflections of shared ancestry. The common ancestor of lophophorates and annelids had an anatomy most closely resembling the annelids.

“At some point, the tommotiid ancestor to the lophophorates became sessile and evolved suspension feeding (catching particles suspended in the water). Then a long, wormy body with numerous, repeated body units became less useful and was reduced.”

Co-author Greg Edgecombe from the Natural History Museum said: “This discovery highlights how important fossils can be for reconstructing evolution.

“We get an incomplete picture by only looking at living animals, with the relatively few anatomical characters that are shared between different phyla. With fossils like Wufengella, we can trace each lineage back to its roots, realising how they once looked altogether different and had very different modes of life, sometimes unique and sometimes shared with more distant relatives.”

Image 1: A reconstruction of how Wufengella would have looked like in life. Illustration made by Roberts Nicholls, Paleocreations.com

Image 2: The fossil Wufengella and a drawing outlining the major components of the organism. Credit: Jakob Vinther and Luke Parry

Image 3: A schematic outline of how tommotiids tell us about the evolution of body plans across the tree of Life. Credit: Luke Parry