9-Jun-2017 6:05 AM EDT, by Uniformed Services University of the Health Sciences (USU)
favorite_border 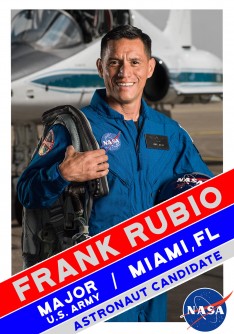 Army Maj. (Dr.) Frank Rubio, a family physician and flight surgeon, is a graduate of the Uniformed Services University of the Health Sciences, and is among the newest class of NASA astronaut candidates.

Rubio, who graduated from USU’s F. Edward Hebert School of Medicine class of 2010, was among the 7 military and 3 civilian astronaut candidates selected by NASA officials for their 2017 class.  He was selected from more than 18,300 applicants -- a process that took more than a year and a half.  He is the second USU alumnus selected for the space program, behind Army Lt.Col (Dr.) Andrew Morgan (class of 2002), who was among NASA’s astronaut class of 2013.

Rubio, whose previous experience includes serving as an Army family physician and flight surgeon, is currently assigned to Fort Carson, Colorado as a surgeon for the 3rd Battalion of the 10th Special Forces Group.  Rubio has accumulated more than 1,100 hours of flight time in helicopters, including 600 hours of combat and imminent danger time. He graduated from the U.S. Military Academy at West Point with a bachelor’s degree in international relations.

“The selection of Maj. (Dr.) Frank Rubio, for the highly competitive astronaut program is an exceptional endorsement of his talents and potential as a military officer and physician. It is also a very positive reflection on USU’s mission to educate and develop military medical leaders. We are all very proud of Frank’s selection as a NASA astronaut candidate.” said USU President Richard W. Thomas, MD, DDS.

Rubio will report to Johnson Space Center in Houston in August with his fellow astronaut-trainees and will receive a wide array of technical training at space centers around the globe to prepare for a number of possible missions, including performing research on the International Space Station, or for deep space missions on NASA’s new Orion spacecraft and Space Launch System rocket.

“We look forward to the energy and talent of these astronauts fueling our exciting future of discovery,” acting NASA Administrator Robert Lightfoot said. “Between expanding the crew on board the space station to conduct more research than ever before, and making preparations to send humans farther into space than we’ve ever been, we are going to keep them busy. These candidates are an important addition to the NASA family and the nation’s human spaceflight team.”

The Uniformed Services University of the Health Sciences, founded by an act of Congress in 1972, is the nation’s federal health sciences university and the academic heart of the Military Health System. USU students are primarily active duty uniformed officers in the Army, Navy, Air Force and Public Health Service who have received specialized education in tropical and infectious diseases, TBI and PTSD, disaster response and humanitarian assistance, global health, and acute trauma care.  A large percentage of the university’s more than 5,800 physician and 1,000 advanced practice nursing alumni are supporting operations around the world, offering their leadership and expertise.  USU also has graduate programs in biomedical sciences and public health, most open to civilian and military applicants, and oral biology, committed to excellence in research.  The University's research program covers a wide range of clinical and other topics important to both the military and public health.  For more information about USU and its programs, visit www.usuhs.edu.