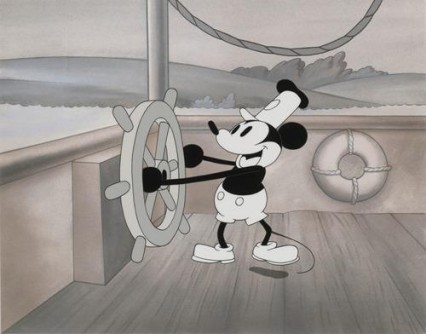 To protect works of art, including this image of Disney’s Steamboat Willie, scientists developed an optoelectronic “nose” to sniff out potentially damaging compounds in pollution.

A press conference on this topic will be held Monday, March 14, at 11 a.m. Pacific time in the San Diego Convention Center. Reporters may check-in at Room 16B (Mezzanine) in person, or watch live on YouTube http://bit.ly/ACSliveSanDiego. To ask questions online, sign in with a Google account.

Newswise — SAN DIEGO, March 14, 2016 — Original drawings and sketches from Walt Disney Animation Studio’s more than 90-year history — from Steamboat Willie through Frozen — traveled internationally for the first time this summer. This gave conservators the rare opportunity to monitor the artwork with a new state-of-the-art sensor. A team of researchers report today that they developed and used a super-sensitive artificial “nose,” customized specifically to detect pollutants before they could irreversibly damage the artwork.

The researchers report on their preservation efforts at the 251st National Meeting & Exposition of the American Chemical Society (ACS). ACS, the world’s largest scientific society, is holding the meeting here through Thursday. It features more than 12,500 presentations on a wide range of science topics.

“Many pollutants that are problematic for human beings are also problematic for works of art,” says Kenneth Suslick, Ph.D. For example, pollutants can spur oxidative damage and acid degradation that, in prints or canvases, lead to color changes or decomposition. “The ability to monitor how much pollution a drawing or painting is exposed to is an important element of art preservation,” he says.

However, works of art are susceptible to damage at far lower pollutant levels than what’s considered acceptable for humans. “The high sensitivity of artists’ materials makes a lot of sense for two reasons,” explains Suslick, who is at the University of Illinois at Urbana-Champaign. “Human beings are capable of healing, which, of course, works of art cannot do. Moreover, human beings have finite lifetimes, whereas ideally works of art should last for future generations.”

To protect valuable works of art from these effects, conservators enclose vulnerable pieces in sealed display cases. But even then, some artists’ materials may “exhale” reactive compounds that accumulate in the cases and damage the art. To counter the accumulation of pollutants, conservators often hide sorbent materials inside display cases that scrub potentially damaging compounds from the enclosed environment. But it is difficult to know precisely when to replace the sorbents.

Suslick, a self-proclaimed “museum hound,” figured he might have an answer. He had already invented an optoelectronic nose — an array of dyes that change color when exposed to various compounds. But it is used largely for biomedical purposes, and it can’t sniff out the low concentrations of pollutants that damage works of art. To redesign the nose with the aim of protecting artwork, he approached scientists at the Getty Conservation Institute (GCI), a private non-profit institution in Los Angeles that works internationally to advance art conservation practice. He proposed that his team devise a sensor several hundred times more sensitive than existing devices used for cultural heritage research. The collaboration took off, and the scientists built a keener nose.

At the time, GCI was involved in a research project with the Walt Disney Animation Research Library to investigate the impact of storage environment on their animation cels, which are transparent sheets that artists drew or painted on before computer animation was developed. Such research ultimately could help extend the life of this important collection. The new sensors would monitor levels of acetic acid and other compounds that emanate from these sheets.

Before the exhibit, “Drawn from Life: The Art of Disney Animation Studios,” hit the road on tour, Suslick recommended placing the sensors in discrete places to monitor the pollution levels both inside and outside of the sealed and framed artworks. If the sensors indicated pollution levels inside the sealed frames were rising, conservators traveling with the Disney exhibit would know to replace the sorbents. An initial analysis of sensor data showed that the sorbents were effective. Suslick says he expects to continue expanding the sensors’ applications in the field of cultural heritage.

Abstract The acceptable pollutant concentration limits for sensitive artwork are generally at or below the few ppb regime: this is only ~1% of the permissible exposure limits (NIOSH PEL) required for humans. Monitoring such pollutants at such low levels is an exceptional scientific challenge, especially to do so in a cost effective fashion for a large number of locations and microenvironments (e.g., every display case in a museum). To meet this challenge, we have extended with new sensor array chemistry our already extremely sensitive and portable “optoelectronic nose” [1-4] and developed cumulative colorimetric sensor arrays. The resulting disposable sensor arrays are inexpensive, cross-reactive sensors using a wide range of chemical interactions with analytes (i.e., not just physical adsorption): an optical analog of mammalian olfaction. By digitally monitoring the change in color of each spot in the easily printed array, one has a quantitative measure of the composite response to volatiles. The use of a disposable array permits the use of stronger chemical interactions, which dramatically improves both sensitivity and specificity compared to any prior enose technology. Importantly the sensor array has been specifically engineering to be insensitive to humidity changes. A new and highly compact reader (the size of a deck of cards) for these arrays based on the color contact image sensor (CIS, used for portable business card and paper scanners) was used for these studies. We have broadened these studies by the use of cell phone camera imaging and made trial experiments in the monitoring of artwork from the Disney Animation Research Library exhibition in Beijing and Shanghai in order to monitor pollutant exposure both during shipping and during exhibition. This exhibition, "Drawn from Life: the Art of Disney Animation Studios" features animation drawings, story sketches, layouts, backgrounds, and concept art spanning the 90 years of the Walt Disney Animation Studio's history. Sensor arrays were used to monitor both exterior and interior environments of passepartout frames at the exhibition and inside the shipping crates during transport.