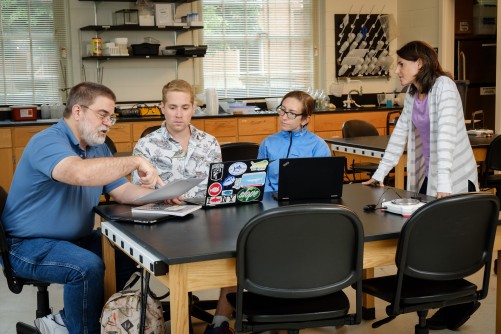 Newswise — Science educators at Wake Forest University are testing how automated feedback combined with new one-on-one teaching methods can improve scientific writing from STEM undergraduates – and result in better explanation of research to the public.

The National Science Foundation (NSF) has awarded the research team nearly $280,000 to conduct the writing experiment. It comes at a pivotal time, with claims of junk science and fake news making headlines almost daily.

“Students don’t see that writing is important in the sciences,” said Dan Johnson, who leads the research team and is a professor in the Biology Department. "They don’t see much value in it. They don’t realize we actually live and die by our writing."

SAWHET (or STEM Automated Writing Help Tool) guides students to break down their lab reports into the proper sections of a scientific paper – title, extract and citations, for example. Help buttons explain those sections, and the software can ask some basic editing questions: Do you need a citation to back up this statement? Do you state your hypothesis? Once the writer addresses those questions, the report is re-submitted.

With the NSF grant, the researchers will teach SAWHET to ask additional content-focused questions, allowing instructors and teaching assistants to concentrate on providing deeper, one-on-one feedback.

Time has been the primary challenge to teaching writing more aggressively to STEM students. One college course can include 150 students. If the instructor gives a writing assignment and edits it twice for about 15 minutes each, that can add up to 70 hours of work.

That’s why the Wake Forest study also will introduce new methods that instructors will use for teaching and evaluating students’ scientific writing. Instructors will be encouraged to let SAWHET do the low-level proofing and format checking, so they can do a deeper dive into the logic, arguments and thinking behind the written words.

This isn’t the first time Johnson and Setaro have flipped the undergraduate science curriculum. They both work on BioBook, a collaborative, interactive online biology resource that replaces traditional written textbooks and encourages inquiry-based learning. The basic edition is free; a customizable version is available, for which students pay $30 per year for access. About 750 students and professors at two universities are using it right now.

SAWHET is an offshoot of BioBook.

“Students were using the assessments in BioBook, and we realized that writing was a major barrier for them,” Johnson said. “We wanted to give students a chance to assess their writing, too.”

Johnson and Setaro, with co-investigator Jerid Francom, associate professor of Spanish and linguistics, will use the first two years of SAWHET data as the control, and will begin collecting new data in the spring 2018 semester. Different stages of collection will reflect different levels of feedback students receive from both SAWHET and instructors.