Researchers at the University of Washington map the localization pattern of nearly every protein in a bacterial cell for its entire cell cycle, a new tool for discovering how bacteria coordinate the timing and location of subcellular processes 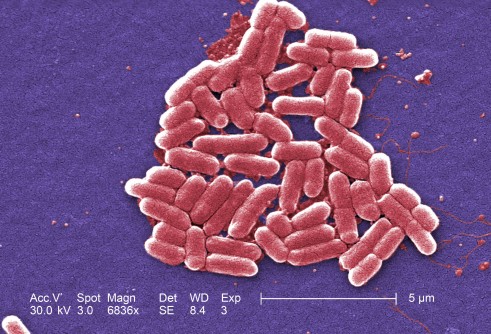 A cluster of colorized E. coli as seen under a scanning electron microscope.

Newswise — WASHINGTON, D.C., February 8, 2015 -- Not unlike an urban restaurant, the success of a bacterial cell depends on three things: localization, localization and localization. But the complete set of controls by which bacteria control the movement of proteins and other essential biological materials globally within the confines of their membrane walls has been something of a mystery. Now, researchers at the University of Washington have parsed out the localization mechanisms that E. coli use to sort through and organize their subcellular components.

"Despite their small size and relative simplicity, bacterial cells appear to possess a robust and complex level of subcellular organization, both spatially and temporally, that was once thought to only exist in more complex organisms," said Nathan Kuwada, a postdoctoral fellow in the lab of Paul Wiggins at the University of Washington.

"We wanted to know how many mechanisms bacteria possess to localize subcellular components, and to answer this question, we set out to image the localization pattern of nearly every protein in a bacterial cell for the entire cell cycle."

Kuwada will describe the group's findings this week at the Biophysical Society's 59th annual meeting in Baltimore, Md.

E. coli localize nearly one-fifth of their proteins to specific subcellular sites, but until now, the cell-cycle localization behavior of only a small subset of proteins had been characterized in detail.

Kuwada and his colleagues sought to remedy this by imaging an existing library of green-fluorescent protein fusions in E. coli by use of a high-throughput live-cell imaging scheme. This allowed them to image close to a thousand individual protein fusions in growing cells for 6-8 hours, providing them with hundreds of complete cell cycles for each protein.

Using custom image processing software, the researchers processed and organized the thousands of images from each experiment, allowing them to quantitatively compare the localization patterns on a genomic scale. The researchers also developed a public online database with all of their raw and processed data in a browsable and searchable form at: http://mtshasta.phys.washington.edu/localizome

Rather than a small number of patterns combining in various permutations determined by function, the researchers found that bacteria possess a large number of distinct patterns with subtle spatial and temporal differences.

For example, Kuwada and his colleagues also observed that the DNA-binding proteins were asymmetrically distributed towards the daughter cell during cell divisions, despite the morphological symmetry between parent and daughter cells.

"Although the asymmetry is somewhat weak, it is still statistically significant and we think it must have an exciting biological significance," Kuwada said. "This finding, which is only observable using our complete-cell-cycle approach, potentially has many biological consequences that we are currently trying to better understand."

Future work for Kuwada and his colleagues includes further exploring the specific mechanisms that drive subcellular organization, through targeting the behavior of specific groups of proteins such as transcription factors with increased precision.

The presentation, "Global characterization of transcription factor localization and partitioning in Escherichia coli" by Nathan J. Kuwada and Paul A. Wiggins, is at 1:45 PM, on Sunday, February 8, 2015, at the Baltimore Convention Center, in Hall C, poster 383. ABSTRACT: http://bit.ly/1KkOgN0