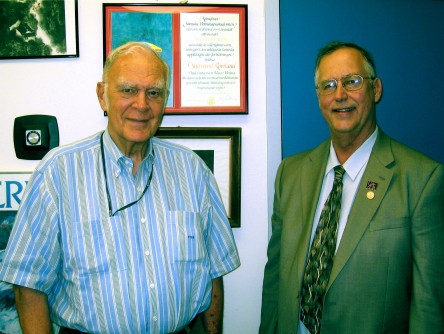 Newswise — The prolific Harvard University biologist E.O. Wilson once observed that people “would rather believe than know.”

It could be a fitting motto for Dr. Jeffrey S. Gaffney, chair of the chemistry department at the University of Arkansas at Little Rock, internationally known for his research in environmental and atmospheric chemistry.

Although he has been advocating it for years, Gaffney said the need for baseline measurements in climate change research is greater than ever.

Gaffney frequently points to the role of atmospheric ethene as a case in point. The gas is emitted from biofuels such as ethanol and other sources, including wildfires.

Gaffney said wildfires are expected to increase significantly with climate change due to earlier springs and longer growing seasons, with droughts anticipated to increase in the summer months, especially in the western and midwestern U.S., according to most climate models.

And while it is well known that ethanol’s combustion as a biofuel leads to enhanced emissions of certain gases, including ethene and methane, little attention has been given to what the gases impact will be in the long term, especially with the potential for increases from wildfire events, according to Gaffney.

To put it another way, while some believe higher ethene levels are devoid of lasting negative impacts, it has yet to be confirmed as fact, says Gaffney.

The use of motor vehicle ethanol (E10) has risen and is expected to increase further with the move towards the use of higher level ethanol content. In addition, agriculture and controlled burns, as well as wildfires, will likely increase current and future levels of ethene, he said.

Ethene is a potent plant growth hormone and could impact crop yields.

“Most folks see the effects of its as a fruit ripening agent in their local grocery stores as it is used in ‘banana’ gas at low levels to rapidly take green bananas to the ripe yellow ones,” he said.

“We know that there are higher ethene levels over certain regions, including the southeastern United States, and are likely to occur in the future,” Gaffney said. “What we don’t know is the impact on ecosystems and agriculture, or even humans. Baseline measurements are key.”

Gaffney’s emphasis on the need for baseline measurements was the topic of his recent keynote address at an Arkansas Academy of Science Meeting.

It is also the topic of a paper (Atmospheric Environment, 56, 161-168, 2012), dedicated, appropriately enough, to Nobel Prize-winning chemist F. Sherwood Rowland, whose work on ozone depletion made him a voice for scientists, including Gaffney, who shared his concerns about global warming, climate change, and global air quality impacts of an ever increasing human population.

“That paper was based on data that Dr. Don Blake and Dr. Rowland took in 2002 over a number of states, including Arkansas, during a period before ethanol/gasoline blends were mandated and when there were no wildfires,” said Gaffney.

“So any increases over that level are likely to have an impact,” Gaffney said. “We know that fire plumes and ethanol/gasoline blends will likely be hundreds of times higher than that, but we have not been continually taking measurements to see what is happening as we have more fires or burn more biofuels in our cars.” And it is not just ethene, according to Gaffney, but many other gases and aerosols that scientists should be following that have impacts on climate, as well as air quality, especially formaldehyde and other aldehydes, black carbonaceous aerosols, and ozone, in addition to the carbon dioxide most frequently talked about.

Gaffney said he was privileged to interview Rowland in 2007 for the American Meteorological Society - Oral History Project (1983-2009) housed on the National Center for Atmospheric Research archives web site at: (https://nldr.library.ucar.edu/archon/index.php?p=collections/findingaid&id=1&q=).

Rowland passed away in March 2012.

Before that time, he served in a variety of capacities, including senior chemist for the Environmental Science Division of Argonne National Laboratory in Chicago. He did his postdoctoral research in the Chemistry Department at Brookhaven National Laboratory, New York.