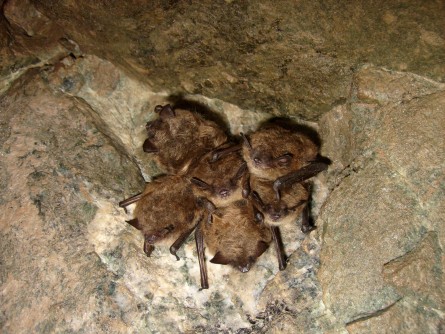 Little brown bats (Myotis lucifugus) ¬– one of many hibernating bat species found in the western US. A new study will look at the threats to this and other bat species as a disease devastating bat populations in eastern North America makes its way west.

“This is a particularly catastrophic wildlife pathogen,“ said Dr. Sarah Olson of WCS, Associate Director of the Wildlife Health Program and Principal Investigator (PI) of the study. “We know it causes high mortality in eastern bats. As this fungal pathogen spreads across the West, it will likely remain in the environment and impact bats indefinitely.”

First identified in New York State in 2006, WNS is a fungal disease causing widespread mortality and threatening some eastern bat species with extinction.

There are 31 bat species in western North America. These species represent an important component of biodiversity, insect control, and other ecosystem services.

In March of 2016, hikers in Washington State discovered a diseased bat that was later confirmed to have WNS. This was the first recorded occurrence of the disease in western North America, which until that point had been found in 27 U.S. eastern and mid-west states and five Canadian provinces. The survival of bat species is threatened at the local, regional and continental scale, and the confirmed presence of the disease in a western bat highlights the urgent need for the planned research.

WCS Canada Bat Specialist and advisor to the study, Dr. Cori Lausen spoke about the timeliness of this study, “Our research has taken on an increased level of urgency, knowing that managers desperately need predictive survivorship information to prioritize mitigation efforts and target conservation actions for the many species of western bats.”

Montana State University’s Dr. Raina Plowright, co-PI of the study said, “Our team combines expertise in disease ecology, bat ecology, bat physiology, mathematical modeling, and landscape ecology. By looking at the system from these multiple angles, we will identify the key processes that determine if a bat species can, or cannot survive WNS.”

Advanced knowledge of which western bat species and populations are susceptible to WNS is critical. This information can be used to target interventions and strengthen conservation approaches near identified refuges for populations anticipated to survive infection.

“Maps of current and future bat habitat will help to paint a picture of how species susceptible to WNS might shift their distribution under a changing climate, within and around military installations,” said co-PI Dr. Brett Dickson of Conservation Science Partners. “By knowing when, where, and under what environmental conditions these shifts are likely to occur, managers can be strategic about the identification and protection of susceptible populations.”

Co-PI Dr. David Hayman of Massey University said, “This study is important because it sets a precedent for how governments and managers may use simultaneous modelling and data collection to understand how a disease epidemic may affect wildlife populations in real time.”

Texas Tech University’s Dr. Liam McGuire said, “Bats are a major player in whatever ecosystem they’re in. They perform many important roles and it is difficult to predict how things will change if bats die in large numbers.”

The research project titled, "Assessing white-nose syndrome in the context of non-stationary conditions in an advancing continental epidemic," builds on Dr. Cori Lausen's collaborative work with Dr. David Hayman and Dr. Sarah Olson. The award will support four years of fieldwork and analyses.