Bats Avoid Collisions by Calling Less in a Crowd 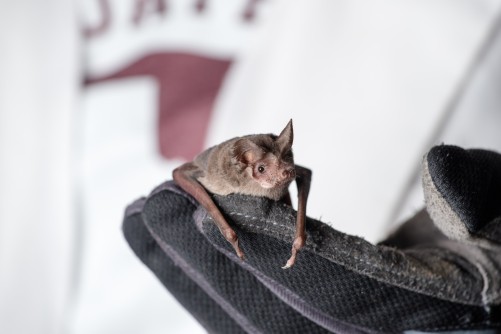 Newswise — In the warm summer months, bats go about their business each night, flying and gobbling up insects (a benefit to us). Using echolocation (making calls and listening for returning echoes to figure out where objects are) they can hunt and navigate around obstacles in total darkness, often in large groups. But if everybody is echolocating at once, how do bats pick out their own echoes?

This question has mystified scientists since the discovery of echolocation, but Dr. Amanda Adams and Dr. Michael Smotherman at Texas A&M University may have found part of the answer. Using wild-caught Mexican free-tailed bats, they study whether the bats adjust their echolocation calls in response to other bat calls.

When bats are flying in a cluttered environment they increase their call rates and listen for returning echoes. This gives them a detailed idea of the location of objects or even other bats. But if a bat’s echo overlaps with another bat’s call or echo, the information gets lost. This is “interference,” and it can be a real problem for a bat because losing information could cause it to miss the insect it was trying to eat or even run into something.

So how do bats get around this, so to speak? More bats mean more echolocation calls, but as soon as a bat hears another bat’s call, they actually start to call less. “We call it ‘mutual suppression,’” says Adams, “and we really think that this is the key to how they are able to live and function socially.”

Adams and her colleagues allowed bats to fly around in a small room that looked a bit like a recording studio: the walls were covered in acoustic foam, there were small microphones for recording, and speakers for playing bat calls.

Each bat used in the experiment started by flying in the room alone and making echolocation calls, which Adams recorded to figure out baseline calling rates. Then the researchers played calls from other bats from up to four speakers placed around the room. By playing calls over one or more speakers, the researchers could simulate a single bat, or a crowd of up to four bats. They discovered that the bat in the room called less when it heard other bats over the speakers.

Next the researchers created a cluttered environment by hanging thin strings from the ceiling. Each string had a piezo sensor (similar to a motion sensor) on it, which allowed Adams to tell if a bat touched one of the strings. Adams found that playing bat calls over the speakers caused the bats to touch the strings more often. The researchers are not yet sure if this reduced navigational performance was because the bats were calling less due to mutual suppression, making their surroundings less clear, or if it was due to interference from the other bat calls.

Finally, each bat was tested with a fake bat, affectionately called “RoboBat.” RoboBat is a robotic bat that can move and flap its wings simulating another, real bat. Although the researchers have put multiple live bats in the room, there is a big benefit of using RoboBat over a live bat: RoboBat can be silenced. Adams found that live bats called more in response to RoboBat’s bat-like physical presence, but called less when calls were played in conjunction with RoboBat. These findings indicate that the bats suppressed their own calls when they heard another bat’s call.

Surprisingly, Adams and her colleagues saw mutual suppression in all of the individual bats that they tested. “This isn’t something where we can only use one bat for a few trials and then the behavior disappears. This is hard-wired in them across every individual that we’re using,” says Adams. The team predicts they will find the same suppression of calling rates in other species of bats.

Interestingly, Adams’s findings could be useful for improving wireless telecommunication networks. In a wireless network, information is sent from multiple computers simultaneously without much interference. Adams says, “You stop and listen for a second and go again. It’s the same thing we’re seeing with the bats.” The team’s future research will determine how bats handle interference from multiple individuals, which may shed light on how to develop better wireless networks.

We have a lot of reasons to be thankful for bats. Who knows? We may soon be thanking bats for more efficient wireless communication.

Adams presented this research at the 2017 annual Society for Integrative and Comparative Biology conference in New Orleans, Louisiana.