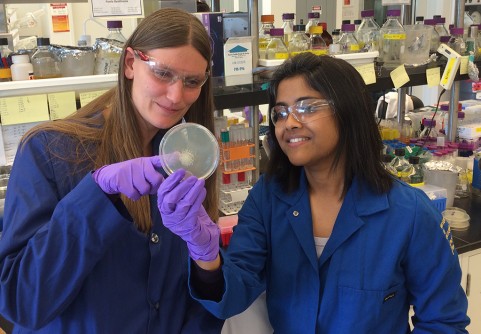 Marijke Frederix (left) and Aindrila Mukhopadhyay in a microbiology lab at the Joint BioEnergy Institute.

Newswise — Researchers at the U.S. Department of Energy’s Lawrence Berkeley National Laboratory (Berkeley Lab) have engineered a strain of bacteria that enables a “one-pot” method for producing advanced biofuels from a slurry of pre-treated plant material.

The Escherichia coli (E. coli) is able to tolerate the liquid salt used to break apart plant biomass into sugary polymers. Because the salt solvent, known as ionic liquids, interferes with later stages in biofuels production, it needs to be removed before proceeding, a process that takes time and money. Developing ionic-liquid-tolerant bacteria eliminates the need to wash away the residual ionic liquid.

The achievement, described in a study to be published Tuesday, May 10, in the journal Green Chemistry, is a critical step in making biofuels a viable competitor to fossil fuels because it helps streamline the production process.

"Being able to put everything together at one point, walk away, come back, and then get your fuel, is a necessary step in moving forward with a biofuel economy," said study principal investigator Aindrila Mukhopadhyay, vice president of the Fuels Synthesis Division at the Joint BioEnergy Institute (JBEI), a DOE Bioenergy Research Center at Berkeley Lab. "The E. coli we've developed gets us closer to that goal. It is like a chassis that we build other things onto, like the chassis of a car. It can be used to integrate multiple recent technologies to convert a renewable carbon source like switchgrass to an advanced jet fuel.”

Breaking down the biofuel production process

The basic steps of biofuel production start with deconstructing, or taking apart, the cellulose, hemicellulose and lignin that are bound together in the complex plant structure. Enzymes are then added to release the sugars from that gooey mixture of cellulose and hemicellulose, a step called saccharification. Bacteria can then take that sugar and churn out the desired biofuel. The multiple steps are all done in separate pots.

Researchers at JBEI pioneered the use of ionic liquids, salts that are liquid at room temperature, to tackle the deconstruction of plant material because of the efficiency with which the solvent works. But what makes ionic liquids great for deconstruction also makes it harmful for the downstream enzymes and bacteria used in biofuel production.

Previous studies have found ways to address these challenges. In 2012, JBEI researchers, including Blake Simmons, a co-author on this new study, had discovered a suite of saccharification enzymes that were tolerant to ionic liquids.

Marijke Frederix, this recent study’s first author and a postdoctoral researcher in Mukhopadhyay’s lab, established that an amino acid mutation in the gene rcdA, which helps regulate various genes, leads to an E. coli strain that is highly tolerant to ionic liquids, providing an important piece to the puzzle. They used this strain as the foundation to build on earlier work – including the ionic-liquid-tolerant enzymes – and take the steps further to the one-pot biofuel finishing line.

Putting the pieces together

They proceeded to test the E. coli strain using ionic-liquid pretreated switchgrass provided by the DOE's Advanced Biofuels and Bioproducts Process Demonstration Unit (ABPDU), a biofuels facility at Berkeley Lab launched in 2011 to accelerate the commercialization of biofuels.

"Armed with the rcdA variant, we were able to engineer a strain of E. coli that could not only tolerate ionic liquid, but that could also produce ionic-liquid-tolerant enzymes that chew up the cellulose, make sugars, eat it and make biofuels," said Frederix. "E. coli remains the workhorse microbial host in synthetic biology, and in our study, using the ionic-liquid-tolerant E. coli strain, we can combine many earlier discoveries to create an advanced biofuel in a single pot."

While ethanol may be one of the more common products to emerge from this process, researchers have looked to more advanced biofuels that can pack more energy punch. In this case, they used production pathways also developed at JBEI previously, and produced d-limonene, a precursor to jet fuel.

"Ultimately, we at JBEI hope to develop processes that are robust and simple where one can directly convert any renewable plant material to a final fuel in a single pot," said Mukhopadhyay. "This study puts us one step closer to this moonshot."

The research was supported by DOE’s Office of Science. The ABPDU is funded by the Bio-Energy Technologies Office within DOE’s Office of Energy Efficiency and Renewable Energy.

JBEI is one of three Bioenergy Research Centers established by the DOE’s Office of Science in 2007. It is a scientific partnership led by Berkeley Lab and includes the Sandia National Laboratories, the University of California campuses of Berkeley and Davis, the Carnegie Institution for Science, and the Lawrence Livermore National Laboratory. DOE’s Bioenergy Research Centers support multidisciplinary, multi-institutional research teams pursuing the fundamental scientific breakthroughs needed to make production of cellulosic biofuels, or biofuels from nonfood plant fiber, cost-effective on a national scale.

DOE’s Office of Science is the single largest supporter of basic research in the physical sciences in the Unites States, and is working to address some of the most pressing challenges of our time. For more information, please visit the Office of Science website at science.energy.gov.