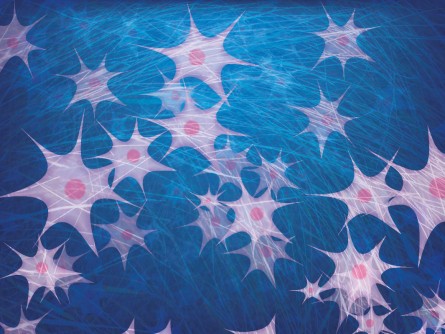 Graphic by Michael Osadciw/University of Rochester.

Newswise — When stem cells are used to regenerate bone tissue, many wind up migrating away from the repair site, which disrupts the healing process. But a technique employed by a University of Rochester research team keeps the stem cells in place, resulting in faster and better tissue regeneration. The key, as explained in a paper published in Acta Biomaterialia, is encasing the stem cells in polymers that attract water and disappear when their work is done.

The technique is similar to what has already been used to repair other types of tissue, including cartilage, but had never been tried on bone.

“Our success opens the door for many—and more complicated—types of bone repair,” said Assistant Professor of Biomedical Engineering Danielle Benoit. “For example, we should now be able to pinpoint repairs within the periosteum—or outer membrane of bone material.”

The polymers used by Benoit and her teams are called hydrogels because they hold water, which is necessary to keep the stem cells alive. The hydrogels, which mimic the natural tissues of the body, are specially designed to have an additional feature that’s vital to the repair process; they degrade and disappear before the body interprets them as foreign bodies and begins a defense response that could compromise the healing process.

Because stem cells have the unique ability to develop into many different types of cells, they are an important part of the mechanism for repairing body tissue. At present, unadulterated therapeutic stem cells are injected into the bone tissue that needs to be repaired. Benoit believed hydrogels would allow the stem cells to finish the job of initiating repairs, then leave before overstaying their welcome.

The research team tested the hypothesis by transplanting cells onto the surface of mouse bone grafts and studying the cell behavior both in vivo—inside the animal—and in vitro—outside the body. They started by removing all living cells from donor bone fragments, so that the tissue regeneration could be accomplished only by the stem cells.

In order to track the progress of the research, the stem cells were genetically modified to include genes that give off fluorescence signals. The bone material was then coated with the hydrogels, which contained the fluorescently labeled stem cells, and implanted into the defect of the damaged mouse bone. At that point, the researchers began monitoring the repair process with longitudinal fluorescence to determine if there would be an appreciable loss of stem cells in the in vivo samples, as compared to the static, in vitro, environments. They found that there was no measurable difference between the concentrations of stem cells in the various samples, despite the fact that the in vivo sample was part of a dynamic environment—which included enzymes and blood flow—making it easier for the stem cells to migrate away from the target site. That means virtually all the stem cells stayed in place to complete their work in generating new bone tissue.

“Some types of tissue repair take more time to heal than do others,” said Benoit. “What we needed was a way to control how long the hydrogels remained at the site.”

Benoit believes degradable hydrogels show promise in many research areas. For example, it may be possible to initiate tissue regeneration after heart attacks without having a patient undergo difficult, invasive surgery, but a great deal of additional research is required.

Funding for Benoit’s research was provided by the National Institutes of Health (NIH), the Orthopaedic Research and Education Foundation/Musculoskeletal Transplant Foundation, and the Rochester/Finger Lakes Eye & Tissue Bank.