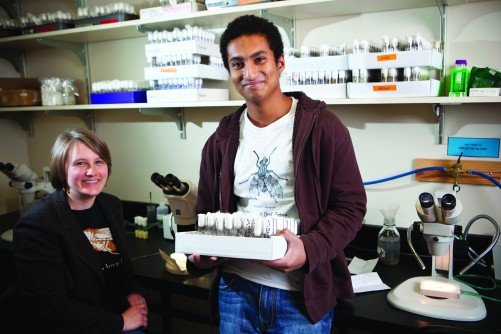 Newswise — BLOOMINGTON, Ind. -- A team of biologists from Indiana University and Brown University believes it has discovered the mechanism by which interacting mutations in mitochondrial and nuclear DNA produce an incompatible genotype that reduces reproductive fitness and delays development in fruit flies.

The new research, led by IU biologists Kristi Montooth and Colin Meiklejohn and including former IU undergraduate researcher Mo Siddiq, describes the cause and consequences of an interaction between the two genomes that co-exist within eukaryotic cells. Animal mitochondrial DNA, or mtDNA, is a small but important genome that encodes a handful of proteins that are essential to oxidative phosphorylation, the pathway that produces the adenosine triphosphate molecule that fuels cellular metabolism.

With this new characterization of a disruptive interaction between mtDNA and nuclear DNA mutations, the scientists provide one of the few mapped cases of a fitness-reducing mitochondrial-nuclear incompatibility.

The genetic interaction that IU biologists mapped, in collaboration with Brown University biologist David Rand, is between mutations that are present in natural populations, rather than being induced in the lab. This has important consequences for understanding genetically complex human diseases.

Many human diseases, such as neuromuscular and neurodegenerative disorders, are associated with mutations in mitochondrial transfer RNAs, or tRNAs, but a single mutation can be highly variable in the degree to which it leads to disease. Montooth and her colleagues' findings suggest that the combined mitochondrial-nuclear genotype for tRNAs and their tRNA synthetases may, in fact, be a better predictor of disease.

"Interactions between mitochondrial and nuclear DNA for fitness have been documented in many organisms, but rarely has the genetic or mechanistic basis of these interactions been elucidated," said Montooth, an assistant professor in the IU College of Arts and Sciences' Department of Biology. "This has limited our understanding of which genes harbor variants causing mitochondrial-nuclear disruption and the processes that are impacted by the co-evolution of these genomes."

Using genetic techniques and many resources available from IU's own Bloomington Drosophila Stock Center, the scientists mapped an interaction between a single mutation in a mitochondrial tRNA gene, mt-tRNA-Tyr, and an amino acid change in its nuclear-encoded charging enzyme, the mitochondrially targeted amino acyl tRNA synthetase, mt-TyrRS -- the enzyme that places the proper amino acid on the tRNA to allow for mitochondrial protein synthesis.

"As a result, the incompatibility decreases the activity of the oxidative phosphorylation pathway," Montooth said, "demonstrating that decreased mitochondrial protein synthesis compromises the energetic function required for proper development of adult structures, such as the ovary and sensory bristles."

These types of fitness-reducing genetic incompatibilities are one hypothesized mechanism that can maintain the formation of new species.

The new research, "An Incompatibility Between a Mitochondrial tRNA and Its Nuclear-Encoded tRNA Synthetase Compromises Development and Fitness in Drosophila," was published online Jan. 31 in PLoS Genetics. Additional co-authors with Montooth, Meiklejohn, Siddiq and Rand were Marissa A. Holmbeck and Dawn N. Abt, both of Brown.

This research was funded by the National Institutes of Health, the National Science Foundation, IU and the IU Hutton Honors College.