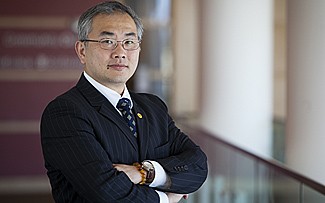 Newswise — Researchers at the University of California, San Diego School of Medicine have identified a new biomarker that predicts whether glioblastoma – the most common form of primary brain cancer – will respond to chemotherapy. The findings are published in the July print issue of Oncotarget.

“Every patient diagnosed with glioblastoma is treated with a chemotherapy called temozolomide. About 15 percent of these patients derive long-lasting benefit,” said Clark C. Chen, MD, PhD, vice-chairman of Academic Affairs, Division of Neurosurgery, UC San Diego School of Medicine and the study’s principal investigator. “We need to identify which patients benefit from temozolomide and which another type of treatment. All therapies involve risk and the possibility of side-effects. Patients should not undergo therapies if there’s no likelihood of benefit.”

To pinpoint which patients were most likely respond to temozolomide, the researchers studied microRNAs that control the expression of a protein called methyl-guanine-methyl-transferase or MGMT. This protein dampens the cancer-killing effect of temozolomide. Tumors with high levels of MGMT are associated with a poor response to temozolomide therapy.

The scientists systematically tested every microRNA in the human genome to identify those that suppressed MGMT expression, with the expectation that high-levels of these microRNAs in the tumor would predict improved therapeutic response to temozolomide.

“We showed that a signature of the MGMT-regulating microRNAs predicted temozolomide response in a cohort of glioblastoma patients. Validation of these results should lead to diagnostic tools to enable us to determine which patients will benefit most from temozolomide therapy,” said Chen.

In the study, the scientists also discovered that injection of the MGMT-regulating microRNAs into glioblastoma cells increased tumor sensitivity to temozolomide treatment.