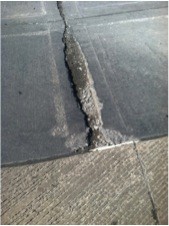 Concrete pavement damage due to salt 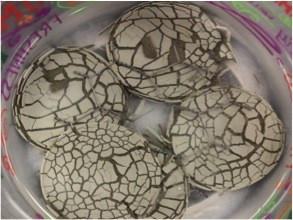 Damage to specimens in lab due to calcium chloride salt

Newswise — New research is focusing on the use of deicing salt blends to build concrete roads that are more durable and extend the service life of concrete pavements. According to the Portland Cement Association, approximately 60 percent of the U.S. Interstate Highway system is paved with concrete. Typically, concrete pavements are viewed as long-lasting and durable with a service life of over 50 years.  However, in cold regions of the U.S., some concrete pavements have shown severe damage within the first ten years of their lifetime. This damage typically manifests itself as a loss of concrete around the joints. One group of researchers has been working for several years to better understand the problem and develop potential approaches to minimize the probability of damage.

While salt is effective at melting snow and ice, as stated previously its use also results in the accumulation of salty fluids in the joint. This salty fluid slowly seeps into the concrete, saturating it with deicing salt fluid. Damage occurs for two reasons:

1) Freezing and thawing of the concrete due to temperature change

2) Chemical interactions between the deicing salt fluid and concrete

Because the first damage mechanism of freezing and thawing has been studied in significant detail, methods to design the concrete to minimize such damage are well known. The second damage mechanism of chemical interactions between deicing salt fluid and concrete, however, has not been well studied and is, therefore, the primary focus of several research projects.

The overall long-term objectives of the research team included developing:

2) Tests and specifications to quantify the damage

3) Mitigation techniques to reduce the damage

The amount of calcium hydroxide in the concrete can be reduced by replacing a specific portion of the cement with waste materials such as fly ash and slag. Research results showed that the amount of the damaging calcium oxychloride phase was significantly reduced when cement was replaced with these waste materials.

The calcium chloride amount can be reduced by blending it with sodium chloride, which is a common application; the sodium chloride-calcium chloride blends have several advantages when compared to using the salts individually. To quantify the damaging calcium oxychloride phase, a new method using, “low-temperature differential scanning calorimetry,” was developed. This method has recently been accepted as a U.S. national standard (AASHTO T365). Testing revealed that the use of blends was a successful method to reduce the amount of the damaging calcium oxychloride phase. Specifically, very low damage would occur when the blends contained 20 percent or lower amounts of calcium chloride and 80 percent or more sodium chloride.

The details of this research can be found in a paper titled “Calcium Oxychloride Formation Potential in Cementitious Pastes Exposed to Blends of Deicing Salt,” accepted and soon to be published by ACI Materials Journal.