Blueprint for Next Generation of Chronic Myeloid Leukemia Treatment 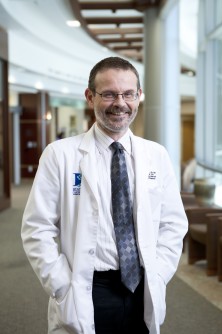 Dr. Michael Deininger, of the University of Utah and the Huntsman Cancer Institute, is co-senior author of the study.

Newswise — SALT LAKE CITY— Researchers at Huntsman Cancer Institute (HCI) at the University of Utah have identified and characterized mutated forms of the gene that encodes BCR-ABL, the unregulated enzyme driving the blood cancer chronic myeloid leukemia (CML). According to the American Cancer Society, nearly 6,000 new cases of CML will be diagnosed in 2014. Drugs already in use, called tyrosine kinase inhibitors (TKIs), target BCR-ABL and are effective at controlling the disease. They do not cure CML but control it in a way that allows patients to get back to normal life and a normal expected lifespan. Before the advent of TKIs, the five-year survival rate for CML was 30% at best; now that number is above 95%. However, 20-30% of patients with CML become resistant to one or more of the TKIs. Most cases of CML resistance result from a single mutation in BCR-ABL, and drugs to control resistance to TKI treatment caused by various single mutations have already been discovered. But BCR-ABL compound mutants that contain two mutations in the same molecule render some or all of the available TKIs ineffective. The research team focused on BCR-ABL compound mutants observed in patients and tested them against all approved TKIs, creating a dataset that can potentially help clinicians decide which drug will be most effective for each mutation combination. They found that none of the TKIs are effective for some compound mutations, indicating the need for further research to accommodate the growing population of CML patients. The results were published online August 14 in the journal Cancer Cell.

“Fortunately, the problems we are studying affect a minority of CML patients, but still this leaves some patients with no good treatment option at all,” said Thomas O’Hare, PhD, an HCI investigator and co-senior author of the study. He is also a research associate professor of Internal Medicine, Division of Hematology and Hematologic Malignancies. “Our goal is to have a TKI option for every patient.”

“We were able to sequence about 100 clinical samples, which gave us a very large body of data to shed light on the number of compound mutations and how they develop,” said Michael Deininger, MD, PhD, co-senior author of the study, a professor of Internal Medicine, and an HCI investigator. “One key finding was that compound mutations containing an already known mutation called T315I tend to confer complete resistance to all available TKIs.”

Working with HCI computational chemist Nadeem Vellore, PhD, the research team modeled at the molecular level why the drugs do not bind to certain BCR-ABL compound mutants. “This puts us in position to evaluate new drug candidates and work toward developing new treatments,” said O’Hare. “Computational analysis was one of the most interesting parts of the study. It not only confirmed what we found but showed the reason behind it,” said Matthew Zabriskie, BS, co-lead author of the study. “We’ve established what the next level of TKI resistance is going to entail.”

According to O’Hare, it is only a matter of time until analogous compound mutations emerge in many other cancers, including non-small cell lung cancer (NSCLC) and acute myeloid leukemia (AML). In these diseases, scientists and clinicians are still learning how to control single mutation-based resistance. “Our findings in CML will provide a blueprint for contending with resistance in these highly aggressive diseases as well,” he said.

In addition to Zabriskie, Deininger, and O’Hare, the study’s authors included 39 other researchers representing HCI, the University of Utah, and 22 other institutions worldwide. The article was dedicated to the legacy of Professor John M. Goldman of Imperial College London, whose work and mentorship made a major mark on the field of CML. “His passing in December 2013 left a very big gap in the CML community,” said Deininger. This study was supported by the Leukemia & Lymphoma Society, the American Society of Hematology, Howard Hughes Medical Institute, Huntsman Cancer Foundation, and the National Institutes of Health/National Cancer Institute grants P30 CA042014 and R01 CA178397. # # #

About Huntsman Cancer Institute at the University of UtahHuntsman Cancer Institute (HCI) is one of the world’s top academic research and cancer treatment centers. HCI manages the Utah Population Database - the largest genetic database in the world, with more than 16 million records linked to genealogies, health records, and vital statistics. Using this data, HCI researchers have identified cancer-causing genes, including the genes responsible for melanoma, colon and breast cancer, and paraganglioma. HCI is a member of the National Comprehensive Cancer Network (a 23-member alliance of the world's leading cancer centers) and is a National Cancer Institute-Designated Cancer Center. HCI treats patients with all forms of cancer and operates several high-risk clinics that focus on melanoma and breast, colon, and pancreas cancers. The HCI Cancer Learning Center for patient and public education contains one of the nation's largest collections of cancer-related publications. The institute is named after Jon M. Huntsman, Sr., a Utah philanthropist, industrialist, and cancer survivor.