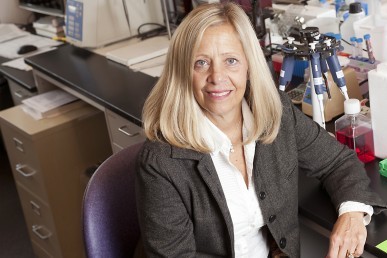 Gail Prins, professor of physiology and director of the andrology laboratory at the UIC College of Medicine

Newswise — Fetal exposure to a commonly used plasticizer found in products such as water bottles, soup can liners and paper receipts can increase the risk for prostate cancer later in life, according to a study from the University of Illinois at Chicago published Jan. 7 online in the journal Endocrinology.

Bisphenol A, or BPA, is widely used to soften plastics. Steering clear of the chemical is nearly impossible, says Gail Prins, professor of physiology at UIC and lead author of the paper.

“Previous studies have shown that people who avoided all contact with plastics or other BPA-containing objects for up to a month or more still had BPA in their urine, which means they must have come into contact with BPA in the last 24 to 48 hours, since it clears the body rather quickly,” said Prins, who is director of the UIC andrology laboratory. "It's very hard to avoid."

Exposure of the fetus to BPA in utero is of particular concern, because the chemical, which mimics the hormone estrogen, has been linked to several kinds of cancer, including prostate cancer, in rodent models. The new findings show that human prostate tissue is also susceptible.

“Our research provides the first direct evidence that exposure to BPA during development, at the levels we see in our day-to-day lives, increases the risk for prostate cancer in human prostate tissue,” Prins said. “The findings of adverse effects of BPA in human tissue are highly relevant and should encourage agencies like the Food & Drug Administration to re-evaluate their policies in the near future.”

Prins investigated the effect of BPA on human cells by implanting human prostate stem cells taken from deceased young-adult men into mice. Prostate stem cells are very long-lived. They arise during early fetal development and produce and maintain a man’s prostate tissue throughout his life.

To mimic exposure to BPA during embryonic development, for two weeks following implantation the mice were fed BPA -- in amounts in line with those seen in pregnant American women -- as the cells produced humanized prostate tissue.

“The amount of BPA we fed the mice was equivalent to levels ingested by the average person,” Prins said. “We didn’t feed them exorbitantly high doses.”

After the tissue was allowed to mature for one month, the mice were given estrogen to mimic the naturally rising estrogen levels seen in aging men. This rise in estrogen later in life is one of the known drivers of prostate cancer.

Tissue was collected after two to four months and analyzed for prostate disease. Prins found that a third of tissue samples taken from mice fed BPA had either pre-cancerous lesions or prostate cancer, compared to only 12 percent in a control group of mice fed oil. If the prostate stem cells were exposed to BPA before implantation and again as they produced prostate tissue in the mice, 45 percent of the tissue samples had pre-cancerous lesions or cancer.

“We believe that BPA actually reprograms the stem cells to be more sensitive to estrogen throughout life, leading to a life-long increased susceptibility to diseases including cancer,” Prins said.