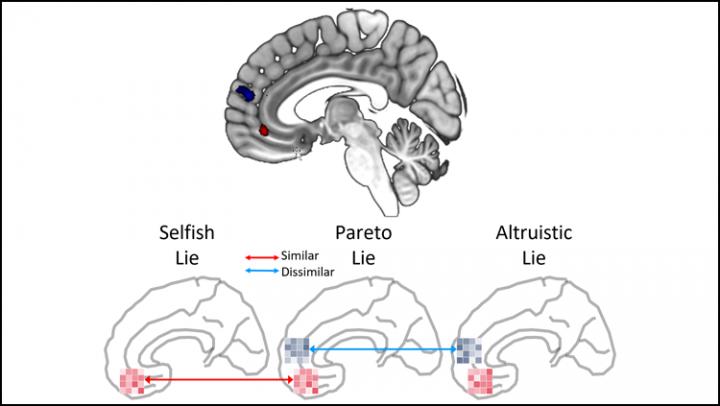 Newswise — You may think a little white lie about a bad haircut is strictly for your friend's benefit, but your brain activity says otherwise. Distinct activity patterns in the prefrontal cortex reveal when a white lie has selfish motives, according to new research published in JNeurosci.

White lies -- formally called Pareto lies -- can benefit both parties, but their true motives are encoded by the medial prefrontal cortex (MPFC). This brain region computes the value of different social behaviors, with some subregions focusing on internal motivations and others on external ones. Kim and Kim predicted activity patterns in these subregions could elucidate the true motive behind white lies.

The research team deployed a stand in for white lies, having participants tell lies to earn a reward for themselves, for an unknown person, or for both. The team used fMRI to measure the MPFC activity of participants and, by comparing the brain activity of white lies with the selfish and altruistic lies, they could predict the true motivation for the lies. Selfish white lies elicited greater activity in the ventral and rostral MPFC. Activity patterns in the ventral subregion was similar to that of selfish lies, while activity patterns in the rostral subregion was dissimilar to altruistic lies.

JNeurosci, the Society for Neuroscience's first journal, was launched in 1981 as a means to communicate the findings of the highest quality neuroscience research to the growing field. Today, the journal remains committed to publishing cutting-edge neuroscience that will have an immediate and lasting scientific impact, while responding to authors' changing publishing needs, representing breadth of the field and diversity in authorship.

About The Society for Neuroscience

The Society for Neuroscience is the world's largest organization of scientists and physicians devoted to understanding the brain and nervous system. The nonprofit organization, founded in 1969, now has nearly 37,000 members in more than 90 countries and over 130 chapters worldwide.