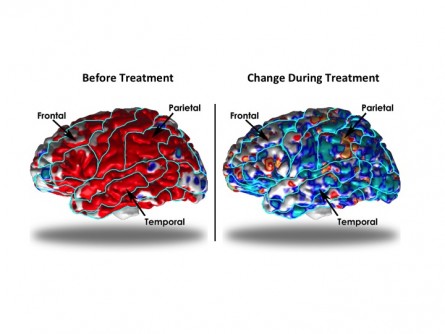 Brain scans of chronically depressed patients before and during treatment. Left: Before treatment, depressed patients had a thicker cortex in the frontal, temporal and parietal lobes of the brain (shown in red). Right: Over 10 weeks of medication, these regions (shown in blue) no longer differed from the thickness of healthy controls.

A study led by Ravi Bansal, PhD, and Bradley S. Peterson, MD, of The Saban Research Institute of Children’s Hospital Los Angeles, has found structural differences in the cerebral cortex of patients with depression and that these differences normalize with appropriate medication. The study, published in Molecular Psychiatry on March 7, is the first to report within the context of a randomized, controlled trial, the presence of structural changes in the cerebral cortex during medication treatment for depression and the first to provide in vivo evidence for the presence of anatomical neuroplasticity in human brain.

“Our findings suggest that thickening of the cerebral cortex is a compensatory, neuroplastic response that helps to reduce the severity of depressive symptoms,” said Peterson, director of the Institute of the Developing Mind at CHLA and professor of pediatrics and psychiatry at the Keck School of Medicine of the University of Southern California. “Patients off medication have a thickened cortex, and the thicker it is, the fewer the symptoms they have. Treatment with medication then reduces the severity of symptoms, which in turn reduces the need for biological compensation in the brain – so that their cortex becomes thinner, reaching thickness values similar to those in healthy volunteers.”

The investigators acquired anatomical brain scans at baseline and again at the end of the 10-week study period for 41 patients with chronic depression, while 39 healthy volunteers were scanned once. This study was conducted with adult patients treated at Columbia University, when Peterson and Bansal were faculty members.

Patients were randomized to receive active medication duloxetine, a selective serotonin and norepinephrine reuptake inhibitor, or placebo. During the trial, patients receiving medication experienced significant improvement of symptoms compared with patients receiving placebo. In medication-treated patients, cortical thickness declined toward values found in healthy volunteers while placebo-treated patients showed a slight thickening of the cortex. According to Bansal, a researcher at CHLA and professor of pediatrics at the Keck School of Medicine of USC, this finding suggests that placebo-treated patients continue to require compensation for their ongoing symptoms.

“Although this study was conducted in adults, the methodology developed – pairing a randomized controlled trial with MRI scanning – can be applied to many other populations in both children and adults,” said Bansal. “Also, our observations of neuroplasticity suggest new biological targets for treatment of persons with neuropsychiatric disorders.”

About Children’s Hospital Los AngelesChildren's Hospital Los Angeles has been named the best children’s hospital in California and among the top 10 in the nation for clinical excellence with its selection to the prestigious U.S. News & World Report Honor Roll. Children’s Hospital is home to The Saban Research Institute, one of the largest and most productive pediatric research facilities in the United States. Children’s Hospital is also one of America's premier teaching hospitals through its affiliation since 1932 with the Keck School of Medicine of the University of Southern California. For more information, visit CHLA.org. Follow us on Twitter, Facebook, YouTube and LinkedIn, or visit our blog at http://researchlablog.org/.