Brain Networks ‘Hyper-Connected’ in Young Adults Who Had Depression 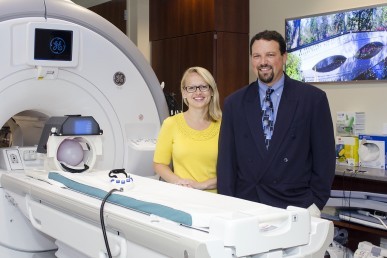 Newswise — Depression may be better predicted and understood now that University of Illinois at Chicago researchers have discovered that young adults who previously experienced the mental illness have hyper-connected emotional and cognitive networks in the brain.

UIC researchers used functional magnetic resonance imaging to examine the brain connectivity of young adults ages 18 to 23 while they were in a resting state. Thirty unmedicated young adults who had previously experienced depression and 23 healthy controls were used in the study, which has been published online in the journal PLOS ONE.

"We wanted to see if the individuals who have had depression during their adolescence were different from their healthy peers," said Rachel Jacobs, research assistant professor in psychiatry at UIC's Institute for Juvenile Research, the lead author of the study.

The researchers found many regions that are "hyper-connected – or talking to each other a little too much – among those who have a history of depression," Jacobs said. These hyper-connected brain networks were related to rumination, with individuals thinking about a problem over and over without actively trying to come up with a solution.

“Rumination is not a very healthy way of processing emotion,” said Scott Langenecker, associate professor of psychiatry and psychology at UIC and corresponding author of the study. “Rumination is a risk factor for depression and for reoccurrence of depression if you’ve had it in the past.”

The researchers also looked at cognitive control (the ability to engage and disengage in thought processes or behaviors), which is a predictor of response to treatment and also relapse of illness.

The researchers will follow these young adults over time to see whether or not these hyper-connectivities predict who will or won't have a recurrence of illness.

Psychosocial and medication treatments for depression can be helpful, said Jacobs, but within two years of recovery half of those teenagers will relapse.

The transition to adulthood, a time when brain networks are nearly mature, may be a critical window for interventions.

“If we can help youth learn how to shift out of maladaptive strategies such as rumination, this may protect them from developing chronic depression and help them stay well as adults,” Jacobs said.

“We think that depression is a developmental outcome, and it’s not a foregone conclusion that people need to become depressed. If we can provide prevention and treatment to those people that are most at risk, we might be able to prevent depression, reduce the number of depressive episodes, or reduce their severity,” said Langenecker.