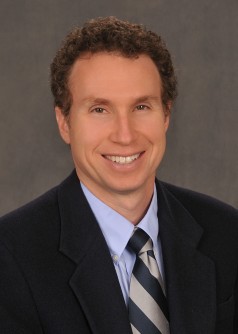 Andrew Newberg, MD, director of research at the Jefferson-Myrna Brind Center of Integrative Medicine and a nationally-known expert on spirituality and the brain

Newswise — (PHILADELPHIA) – Researchers at Thomas Jefferson University and the University of Sao Paulo in Brazil analyzed the cerebral blood flow (CBF) of Brazilian mediums during the practice of psychography, described as a form of writing whereby a deceased person or spirit is believed to write through the medium’s hand. The new research revealed intriguing findings of decreased brain activity during the mediums' dissociative state which generated complex written content. Their findings will appear in the November 16th edition of the online journal PLOS ONE at http://dx.plos.org/10.1371/journal.pone.0049360.

The 10 mediums—five less expert and five experienced—were injected with a radioactive tracer to capture their brain activity during normal writing and during the practice of psychography which involves the subject entering a trance-like state. The subjects were scanned using SPECT (single photon emission computed tomography) to highlight the areas of the brain that are active and inactive during the practice.

“Spiritual experiences affect cerebral activity, this is known. But, the cerebral response to mediumship, the practice of supposedly being in communication with, or under the control of the spirit of a deceased person, has received little scientific attention, and from now on new studies should be conducted,” says Andrew Newberg, MD, director of Research at the Jefferson-Myrna Brind Center of Integrative Medicine and a nationally-known expert on spirituality and the brain, who collaborated with Julio F. P. Peres, Clinical Psychologist, PhD in Neuroscience and Behavior, Institute of Psychology at the University of Sao Paulo in Brazil, and colleagues on the research. The mediums ranged from 15 to 47 years of automatic writing experience, performing up to 18 psychographies per month. All were right-handed, in good mental health, and not currently using any psychiatric drugs. All reported that during the study, they were able to reach their usual trance-like state during the psychography task and were in their regular state of consciousness during the control task.

The researchers found that the experienced psychographers showed lower levels of activity in the left hippocampus (limbic system), right superior temporal gyrus, and the frontal lobe regions of the left anterior cingulate and right precentral gyrus during psychography compared to their normal (non-trance) writing. The frontal lobe areas are associated with reasoning, planning, generating language, movement, and problem solving, perhaps reflecting an absence of focus, self-awareness and consciousness during psychography, the researchers hypothesize.

Less expert psychographers showed just the opposite—increased levels of CBF in the same frontal areas during psychography compared to normal writing. The difference was significant compared to the experienced mediums. This finding may be related to their more purposeful attempt at performing the psychography. The absence of current mental disorders in the groups is in line with current evidence that dissociative experiences are common in the general population and not necessarily related to mental disorders, especially in religious/spiritual groups. Further research should address criteria for distinguishing between healthy and pathological dissociative expressions in the scope of mediumship.

The writing samples produced were also analyzed and it was found that the complexity scores for the psychographed content were higher than those for the control writing across the board. In particular, the more experienced mediums showed higher complexity scores, which typically would require more activity in the frontal and temporal lobes, but this was not the case. Content produced during psychographies involved ethical principles, the importance of spirituality, and bringing together science and spirituality.

Several possible hypotheses for these many differences have been considered. One speculation is that as frontal lobe activity decreases, the areas of the brain that support mediumistic writing are further disinhibited (similar to alcohol or drug use) so that the overall complexity can increase. In a similar manner, improvisational music performance is associated with lower levels of frontal lobe activity which allows for more creative activity. However, improvisational music performance and alcohol/drug consumption states are quite peculiar and distinct from psychography. “While the exact reason is at this point elusive, our study suggests there are neurophysiological correlates of this state,” says Newberg.

“This first-ever neuroscientific evaluation of mediumistic trance states reveals some exciting data to improve our understanding of the mind and its relationship with the brain. These findings deserve further investigation both in terms of replication and explanatory hypotheses,” states Newberg.