Bringing Back the Buzz 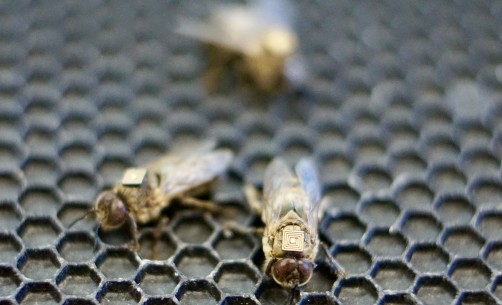 Newswise — Like all worthwhile research, the projects undertaken by Creighton University biology professor Carol Fassbinder-Orth, PhD, have had a significant degree of difficulty.

This latest interest, however, has proved hard for reasons related to both the science and the subject.

Two years ago, spurred by her youth spent on a honeybee farm, Fassbinder-Orth began pondering the devastating phenomenon of colony collapse disorder in which worker bees leave their home hives in droves, never to return. Estimates on the impact of the disorder put a more than 50 percent decline on the bee population at various sites around the world. The American Midwest, Fassbinder-Orth said, has been particularly prone to the problem. At the farm where she grew up in northeast Iowa, more than two-thirds of the European honeybee colonies were lost last winter.

The disorder, with many potential contributing factors, causes individual bees to commit altruistic suicide, leaving the hive as soon as they realize they’ve become ill. But by then, it’s too late. The illness has spread and soon, the entire hive will be on its way out to die in the grips of paralysis. In Fassbinder-Orth’s controlled environment to observe the dynamics of the hive when a virus that may cause CCD is introduced, the bees are kept close to the hive to see what behaviors they exhibit in the runup to leaving and dying.

“It’s sad,” said Fassbinder-Orth, who still raises honeybees on a farm near Glenwood, Iowa. “It’s hard to watch. In less than a day, you start to see them get really frantic. They know something’s wrong. They’re trying to leave, they’re bouncing off the walls. Then they start to shake, and then it’s paralysis. And by then, it’s spread through the colony. It’s rather sad to see the progression and then to see its aftermath in colony collapse disorder.”

Fassbinder-Orth’s project, now gathering steam with a Haddix President’s Faculty Research Grant, is to look at one potential cause of colony collapse disorder and determine how, why and — perhaps most importantly — when a virus linked to the disorder and carried by a mite strikes a bee.

The varroa mite attaches to larval or young bees and introduces a virus that drains a protein called vitellogenin from the bees. Bees are born with a lifetime’s supply of vitellogenin, which gradually is used up over the lifecycle and dictates when a bee leaves the colony at the end of its life. Equipped with comprehensive data on vitellogenin taken by undergraduate researcher and junior neuroscience major Ryan Sabotin, Fassbinder-Orth hypothesizes that one of the contributing factors to colony collapse disorder is this premature aging brought on by the viral sapping of vitellogenin.

“Bees are social animals and this altruistic suicide is the way they attempt to preserve the rest of the colony,” Fassbinder-Orth said. “There have been a few studies about this behavior, but nothing looking at viral infection. It’s hard to do that observing in nature, so we hope we can create the conditions to more closely study what’s happening with their behaviors and their responses.”

With help from a student researcher, junior computer science major and RaD Lab intern Sam Hughes, and innovation analysts at the RaD Lab, Fassbinder-Orth has been at work creating an environment that can contain and monitor bees in the hopes of learning more about their behavior leading up to their flight from the hive and eventual death.

“Honeybees have been my thing this semester,” she said. “I got into this not knowing much about them, but having spent time with Dr. Fassbinder-Orth and reading up on them, it’s definitely a situation that is sad but also a little frightening. If bees are gone and we’re entirely reliant on wind pollination, that’s something everyone should care about. That’s the world’s food supply in danger.”

Hughes, Correa and Cash, with help from RaD Lab staffers Mark Panning and Steve Maaske, looked at several ways to take accurate counts of the bees and record behavior. Ultimately, and after many trials and experiments, the researchers decided on the RFID chips applied gently to the bees and corresponding to a chip reader tuned to monitoring the bees’ comings and goings. A main bee box simulating a hive would connect, via clear plastic tubing, to other boxes to which infected bees will presumably travel.

A portion of the funding for the project has come through Canon, one of the RaD Lab’s corporate and technological partners and, in return, Canon asked the researchers if they’d be willing to film a commercial on the project. The researchers took part in some basic field work at the Fassbinder-Orth’s farm.

“I have not had much exposure to bees or beekeeping, so it was a little scary at first,” Correa said. “But Dr. Fassbinder-Orth told us what clothes to wear and that we’d be working with nursing bees, the least likely ones to sting. It turned out to be a really amazing experience and I know I learned a lot about the importance of bees in the ecosystem.”

For Hughes, Correa and Cash, taking steps toward answers in a monumental scientific issue underscores the Creighton mission to engage undergraduates in meaningful research.

“Colony collapse disorder, it’s something in the news, something happening right now,” Cash said. “It’s not every day you get that kind of an opportunity. It’s been a cool project to work on, one we hope can make a difference.”

Reducing the varroa level and finding out when in the lifecycle of the mite or the bee the virus begins to have an effect will be crucial in the research. After that, Fassbinder-Orth said the question becomes one of treatment, an issue that still appears overwhelming for beekeepers and biologists contending with colony collapse disorder.

One answer could be found in the physiology and behavior of Africanized honeybees, which are far less susceptible to the disorder. Other solutions could be in some of the possible contributing factors to colony collapse disorder already observed, such as the effects of habitat changes, the preponderance of monoculture in farmlands around the globe and the use of pesticides.

“It’s like death by a thousand cuts,” Fassbinder-Orth said. “Every one of those cuts shortens a lifespan or causes changes in behavior. Looking at this virus, it appears that it’s doing a significant amount of damage, so that’s our niche right now.”

Partnering with the RaD Lab and finding an agile problem solver in Hughes, Fassbinder-Orth said, has been critical to the process.

“None of this would be possible without the work being done at the RaD Lab,” she said. “I was looking for unique students to participate in this project, students who were curious and interested in solving problems and there’s no shortage of those students at the RaD Lab.”

“I’m excited about it,” Hughes said. “Sherlock Holmes retired and became a beekeeper, and he was always looking out for a good problem to solve. It’s been a lot of trial and error, but I hope we’ve been able to fail forward.”