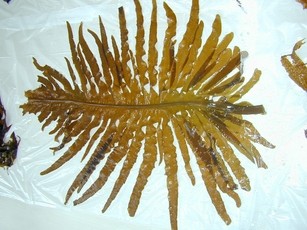 Brown seaweed, used as a flavor component in many Asian soups and salads, contains a compound that appears in animal studies to promote weight loss by reducing the accumulation of fat, according to researchers at Hokkaido University in Japan. Shown is Undaria pinnatifida, a type of brown seaweed also known as wakame.

Chemists in Japan have found that brown seaweed, a flavor component used in many Asian soups and salads, contains a compound that appears in animal studies to promote weight loss by reducing the accumulation of fat. Called fucoxanthin, the compound achieved a 5 percent to 10 percent weight reduction in test animals and could be developed into a natural extract or drug to help fight obesity, the researchers say.

The compound targets abdominal fat, in particular, and may help reduce oversized guts, the scientists say. Their study was presented today at the 232nd national meeting of the American Chemical Society.

Fucoxanthin is a brownish pigment that gives brown seaweed its characteristic color and also conducts photosynthesis (the conversion of light to energy). It is found at high levels in several different types of brown seaweed, including a type of kelp that is used in traditional Japanese miso soup. But fucoxanthin is not found in abundance in green and red seaweed, which also are used in many Asian foods, the researchers say.

The brown seaweed used in the current study was Undaria pinnatifida, a type of kelp also known as wakame, which is widely consumed in Japan. As kelp forests are found in abundance along the California coast, the new research findings could represent a potentially lucrative market if kelp — of which there are many varieties — can be developed into effective anti-obesity drugs, according to the scientists.

"I hope that our study [points to a way to] help reduce obesity in the U.S. and elsewhere," says study leader Kazuo Miyashita, Ph.D., a chemistry professor at Hokkaido University in Hokkaido, Japan. The compound appears to fight fat through two different mechanisms, he says.

The study involved more than 200 rats and mice. In obese animals fed fucoxanthin, the compound appeared to stimulate a protein, UCP1, that causes fat oxidation and conversion of energy to heat, Miyashita says. The protein is found in white adipose tissue, the type of fat that surrounds internal organs. As the abdominal area contains abundant adipose tissue, the compound might be particularly effective at shrinking oversized guts, the researcher says. This is the first time that a natural food component has been shown to reduce fat by targeting the UCP1 protein, he says. The pigment also appeared in animal studies to stimulate the liver to produce a compound called DHA, a type of omega-3 fatty acid, at levels comparable to fish oil supplementation. Increased levels of DHA reduce 'bad cholesterol' (low density lipoprotein), which is known to contribute to obesity and heart disease. But unlike fish oil supplements, fucoxanthin doesn't have an unpleasant smell, Miyashita says. No adverse side effects from fucoxanthin were reported in the mice and rats used in the study.

But eating lots of seaweed is not the quickest or most convenient path to weight loss, Miyashita cautions. He notes that a person would probably need to eat huge amounts of brown seaweed daily to cause noticeable weight loss. That's because fucoxanthin is tightly bound to proteins in the seaweed and is not easily absorbed in the form of whole seaweed. However, he hopes to extract the most active form of fucoxanthin from brown seaweed so that it can be developed into a pill that people can take daily or as needed.

Human studies are planned, the researcher says, but adds that it may take three to five years before such an anti-obesity pill is available to consumers. Until then, people should continue to eat a well-balanced diet and get plenty of exercise, he says. Funding for the current study was provided by the Japanese government.

The paper on this research, AGFD 039, will be presented Monday, Sept. 11, at 8:45 a.m., at the San Francisco Marriott, Nob Hill C, during the symposium, "Functional Foods and Health."

Kazuo Miyashita, Ph.D., is a chemistry professor in the Graduate School of Fisheries Sciences at Hokkaido University in Hokkaido, Japan.