This LiDAR image shows the central portion of Mound Key, located in Estero Bay adjacent to Fort Myers Beach in Florida along the Gulf of Mexico. 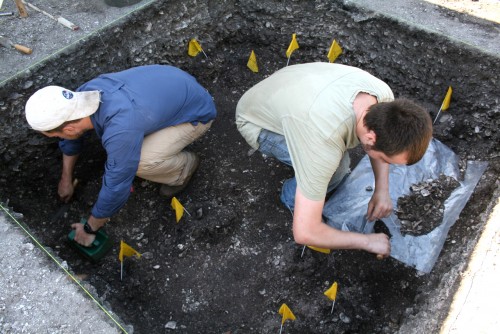 Two University of Georgia students excavate a site on top of Mound 1 as part of a study on Mound Key, located in Estero Bay adjacent to Fort Myers Beach in Florida along the Gulf of Mexico.

Newswise — Athens, Ga. – Centuries before modern countries such as Dubai and China started building islands, native peoples in southwest Florida known as the Calusa were piling shells into massive heaps to construct their own water-bound towns.

One island in particular, known as Mound Key, was the capital of the Calusa kingdom when Spanish explorers first set foot in the area. Supported in part by a grant from the National Geographic Committee for Research and Exploration, a new interdisciplinary study led by University of Georgia anthropologist Victor Thompson unearths information on how the composition of Mound Key, located in Estero Bay adjacent to Fort Myers Beach in Florida along the Gulf of Mexico, changed over the centuries in relation to both environmental and social shifts.

The findings were published April 28 in the journal PLOS One.

“This study shows peoples’ adaptation to the coastal waters of Florida, that they were able to do it in such a way that supported a large population,” said Thompson, an associate professor of anthropology in UGA’s Franklin College of Arts and Sciences and the director of the Center for Archaeological Sciences. “The Calusa were an incredibly complex group of fisher-gatherer-hunters who had an ability to engineer landscapes. Basically, they were terraforming.

Mound Key was primarily constructed of heaps of shells, bones and other discarded objects known as midden. Thompson and his colleagues did intensive research on the island in 2013 and 2014 and used coring, test and block excavations and radiocarbon dating to determine that the midden wasn’t uniform from top to bottom.

Typically, the age of the materials found in midden shifts from more recent to older the farther down one digs. However, this was not the pattern Thompson and his colleagues found at Mound Key in their cores and excavations.

By running a series of radiocarbon dates, a process that involves measuring the remaining amount of radioactive carbon in a sample to estimate its age, they found that many of the charred wood fragments and shells were not arranged in the usual pattern of younger to older. Instead, they found older shells and charcoal fragments above younger ones—in other words, completely out of order. What this pattern suggests to Thompson and his colleagues is that the Calusa were reworking midden deposits to create landforms and were shaping them for a variety of reasons and purposes.

“If you look at the island, there’s symmetry to it, with the tallest mounds being almost 10 meters high (or 32 feet) above modern sea level,” Thompson said. “You’re talking hundreds of millions of shells. … Once they’ve amassed a significant amount of deposits, then they rework them. They reshape them.”

Thompson hypothesizes that the island was occupied early in its existence and midden accumulated as simply the result of daily subsistence. During periods of cooler temperatures when the sea level lowered and fish were scarce, the Calusa abandoned the island. Once climatic conditions and fishing became productive again, they reoccupied Mound Key.

Its second occupation is associated with large-scale labor projects that ultimately gave the island its final shape. All this work appears to have been supported largely by fishing—and possibly the storage of the live surpluses of those aquatic harvests.

The Calusa were powerful—they controlled most of south Florida when the Spanish arrived on Mound Key in the 16th century. These fisher kings confused the European explorers because they weren’t farmers; they typically had only small garden plots, and, on top of that, their capital town was built on an artificial island.

“They had a fundamentally different outlook on life because they were fisher folk rather than agriculturalists, which ultimately was one of the great tensions between them and the Spanish,” Thompson said.

“If you think about the way in which you interact with people, it is dependent on your history, and it’s the same with any society. So the Calusa’s long-term history really structured the way those interactions with the Spanish went.”

The Calusa economy was built on fish, shellfish and other seafood, and it centered on an island 51 hectares in size, or about 126 acres, where about 1,000 people lived.

“One of the really fascinating things is that we have historic documents from the Spanish on what it was like there, the buildings and interactions that people had in the 1500s and 1600s,” Thompson said. “Even though it was a relatively brief moment in time, to be able to walk around the island and envision those kinds of things happening, that’s one aspect that I find extremely interesting.”

Through their excavation and coring, the researchers are finding that previous ideas on the Calusa society fall short and only roughly characterize its emergence and existence. They’re also finding the role of environmental change and surplus production in daily life needs to be given more weight in studies. This is something Thompson’s colleagues have been studying in depth at another important Calusa site, Pineland.

“Pineland was the second largest of the Calusa towns when the Spaniards arrived,” said study co-author William Marquardt of the Florida Museum of Natural History. “Our research there over more than 25 years has provided an understanding of how the Calusa responded to environmental changes such as sea-level rises. They lived on top of high midden-mounds, engineered canals and water storage facilities, and traded widely while developing a complex and artistic society. It takes a team of scientists with different skills working together to discover how all this worked.”

To learn more about these aspects of the Calusa, Thompson, Marquardt and the rest of the team are heading back to Mound Key in May with funding from National Geographic Society/ Waitt Grants Program and the National Science Foundation to start the second phase of their research.

The study, “From Shell Midden to Midden-mound: The Geoarchaeology of Mound Key, an Anthropogenic Island in Southwest Florida, USA,” is available at http://journals.plos.org/plosone/article?id=10.1371%2Fjournal.pone.0154611.

Research at Mound Key is supported in part by a grant from the Committee of Research and Exploration, National Geographic Society (#9258-13), a Faculty Research Grant from the UGA Office of the Vice President for Research and the John S. and James L. Knight Endowment for South Florida Archaeology, Florida Museum of Natural History.

Others on the study, which Thompson points out was an interdisciplinary mix of geoarchaeologists, anthropologists, archaeologists, paleoethnobotanists and zooarchaeologists, include Marquardt and Karen Walker of the Florida Museum of Natural History, Alexander Cherkinsky of the Center for Applied Isotope Studies at UGA, Amanda Roberts Thompson of the UGA Laboratory of Archaeology, Lee Newsom of Pennsylvania State University, and Michael Savarese of Florida Gulf Coast University.

A PDF of this study is available by contacting Stephanie Schupska at schupska@uga.edu.

Caption: This LiDAR image shows the central portion of Mound Key, located in Estero Bay adjacent to Fort Myers Beach in Florida along the Gulf of Mexico. 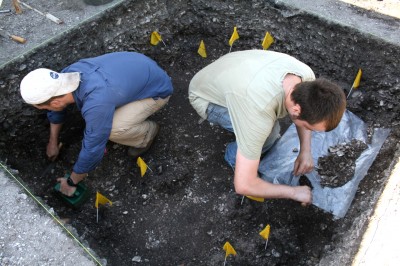 Caption: Two University of Georgia students excavate a site on top of Mound 1 as part of a study on Mound Key, located in Estero Bay adjacent to Fort Myers Beach in Florida along the Gulf of Mexico.