Wesley Dotson has been named to the Texas Autism Council and the Texas Department of Licensure and Regulation Behavior Analysts Advisory Board. 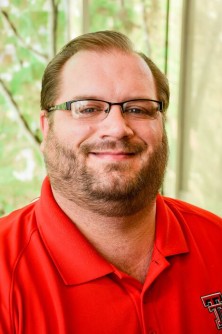 Newswise — Since its creation in 2005, Texas Tech University’s Burkhart Center for Autism Education and Research has been a leader in training, resources and support. Now, director Wesley Dotson has a chance to impact the way autism services and supports are designed, delivered and evaluated across the entire state of Texas.

Dotson, who also is an associate professor in the Special Education Program in the Department of Educational Psychology and Leadership at Texas Tech, has been named chairman of the Texas Autism Council (TAC) and a member of the Texas Department of Licensure and Regulation Behavior Analysts Advisory Board.

“Dr. Dotson’s work at the Burkhart Center is groundbreaking and combines a strong service component with research,” said College of Education Dean Scott Ridley. “The acknowledgement of his work through appointment to these boards is another indicator of the quality work he is doing.”

Established in September 2016, the TAC includes autism experts from across the state appointed for two-year terms by the executive commissioner of the Texas Health and Human Services Commission (HHSC). After being appointed, Dotson was nominated and elected chairman by his fellow council members.

“The role of the TAC is to advise the commissioner on issues related to autism and its impact on families, schools and the community,” Dotson said. “We exist to give voice to professionals and families about their experience of autism and, particularly, their experiences interacting with state service agencies and HHSC programs.”

Dotson said the council has existed before in various forms but was re-established under the 2016 reorganization of HHSC to reflect the new organization of state autism programs. Members have spent the past year developing and exploring various services and programs overseen by HHSC and receiving feedback from stakeholders within and outside the council about the needs around the state.

“In the coming year, we will prepare a comprehensive report for the HHSC commissioner representing the ‘state of the state’ in autism and, hopefully, capturing the voices and stories of individuals and families navigating an autism diagnosis and services and supports in the state of Texas,” Dotson said. “I hope to lead the council in the preparation of a summary report that will have a positive impact on how HHSC interacts with professionals and families across the state and that can serve as a resource for state officials in crafting quality policy and legislation.”

Dotson also recently joined the Behavior Analyst Advisory Board, which was created during the 85th Texas Legislature session in May under Senate Bill 589. The board’s first meeting in December began the process of creating a regulatory framework for issuing state licenses to behavior analysts and assistant behavior analysts.

“The field of applied behavior analysis has a national certifying board and an international practice community,” said Dotson, who also is a board-certified behavior analyst. “In the last several years, we have moved toward more formal recognition at the state level in the form of licensure for practice in individual states. Like lawyers or doctors, this is an important recognition of the field.”

Behavior analysts use learning techniques, principles and interventions to encourage meaningful and positive change in behavior. While applied behavior analysis is not only an intervention for autism, Dotson said licensure helps protect the wider professional identity of applied behavior analysts by clarifying that analysts are more than just autism experts or school-based practitioners. It also reinforces the significance of the methods in regards to autism education.

“Applied behavior analysis-based therapies are among the only empirically validated and effective interventions for individuals with autism, and anything that makes it more likely that families can access those services only helps to increase the probability of positive and meaningful life outcomes for those individuals,” Dotson said. “Licensure typically carries more weight than board certification with insurance companies and increases the likelihood that medical insurance will reimburse for services, and that other agencies, like schools, will recognize and hire behavior analysts.”

Licensure also helps ensure the quality of interventions being delivered by those calling themselves behavior analysts is higher, Dotson said. The work of the board will have direct impact by helping to define and manage what it means to be a practicing behavior analyst in the state of Texas.

“Outwardly, this means we provide a credential and a set of practice standards and expectations families can use to evaluate whether or not an individual practitioner they are working with, or might want to work with, is competent to do the work they are claiming to be able to do,” Dotson said. “We also give families a voice and a process to report and investigate services across the state by providing information and services to ensure quality practitioners are recognized and those not meeting practice guidelines are also identified and addressed.”

The Texas Department of Licensing and Regulation will begin issuing licenses in September. As the board prepares for the initial rollout of licenses later this year, Dotson said they are working to develop and address practice issues related to training, discipline and professional development.

“I am excited about the opportunity because I believe being a part of establishing and regulating what it means to practice behavior analysis in the state is perfectly in line with my role in the Burkhart Center; where I prepare future behavior analysts to practice, oversee my own clinical practice and use my position as a center director and researcher to serve the university and the state in a more broad leadership capacity,” Dotson said. “It is an honor and privilege to represent Texas Tech as one of the only university-affiliated professionals on the nine-person board.”

Dotson said both of these appointments will allow him to develop and bring to his leadership at the Burkhart Center a statewide perspective on the needs and challenges facing those affected by and serving autism.

“I am better able to position the Burkhart Center at the forefront of practice and research in the state by playing an active part in state organizations impacting the fields of behavior analysis and autism,” Dotson said. “Ultimately, I hope my work – and that of my colleagues and collaborators – leads to higher-quality services that are more widely available, lower cost, more effective and better-known and accessed. We want to influence policy and practice in a way that directly positively impacts the quality of life of individuals with autism and their families across the state.”