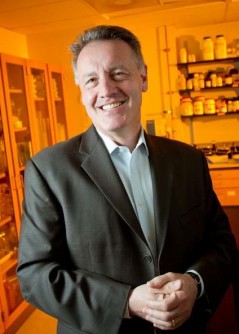 Newswise — PHILADELPHIA–(Feb. 12, 2015)– While targeting phosphatidylinositol-3 kinase (PI3K) in cancer cells appears to be an effective strategy from an academic perspective, currently available PI3K-targeted therapies only show modest levels of effectiveness, with patients eventually becoming resistant to the treatment. Now, a study led by researchers at The Wistar Institute has shown that an approach that targets both PI3K and the mitochondria within these cancer cells can dramatically improve the effectiveness of targeted therapy and significantly reduce the chances of developing resistance.

The findings were published online in the Journal of the National Cancer Institute.

PI3K is a signaling enzyme that is considered the “master switch” of cell proliferation. Since it is exploited in virtually every human cancer, PI3K appears to be a perfect target for the disease. Last fall, one PI3K inhibitor, Idelalisib, received approval from the FDA, and several more are in clinical development. However, only modest activity has been observed when patients receive these therapies. Additionally, the drugs cause toxicity and only offer short-lived benefits, meaning that patients would rapidly become resistant to treatment.

Researchers at Wistar have shown the two-step process that allows tumor cells to persist in the wake of a PI3K blockade, with completely unexpected results. Tumor cells are able to bypass PI3K and reactivate the AKT pathway, another master switch that controls tumor cell maintenance located downstream of the PI3K pathway. Once AKT has been reactivated, it travels to the mitochondria – or the “powerhouse” of the cell – where it phosphorylates a protein called cyclophilin D. Once this happens, the mitochondria in tumor cells are stabilized and prevent them from going through apoptosis, or sudden cell death.

What may have been a frustrating discovery on how tumor cells evade PI3K-targeted therapies ended up being quite fortuitous for the lab of Dario C. Altieri, M.D., executive vice president and chief scientific officer of The Wistar Institute, director of Wistar’s Cancer Center, the Robert and Penny Fox Distinguished Professor, and lead author of the study.

“Ironically, the very same function that protects tumor cells from PI3K therapy is also their Achilles’ heel,” explained Altieri. “We have a drug called Gamitrinib that targets cyclophilin D in the mitochondria of tumor cells. It was the obvious next step to see whether the addition of Gamitrinib could resensitize tumor cells to PI3K therapy, and that is exactly what happened.”

When Altieri’s lab tested the novel combination strategy of Gamitrinib with PI3K therapy, they observed potent anticancer activity in difficult-to-treat tumors as well as improved survival in a mouse model with glioblastoma, a type of brain cancer with no effective therapies currently available. Gamitrinib is currently in clinical development and supported by a $1.5 million Department of Defense Congressionally Directed Medical Research Program Grant.

“For years there have been great expectations for inhibiting the PI3K pathway but clinical responses for molecular therapies alone frequently are short-lived,” said Russel E. Kaufman, M.D., president and CEO of The Wistar Institute. “Dario’s research is twofold: it restores sensitivity to the PI3K pathway and destroys the ability of cancer cells to adapt and become resistant to drugs. This new combination means exciting therapeutics are on the horizon.”

The Wistar Institute is an international leader in biomedical research with special expertise in cancer research and vaccine development. Founded in 1892 as the first independent nonprofit biomedical research institute in the country, Wistar has long held the prestigious Cancer Center research advances move from the laboratory to the clinic as quickly as possible.Wistar Science Saves Lives. On the Web at www.wistar.org.