Can You Judge a Man by His Fingers? 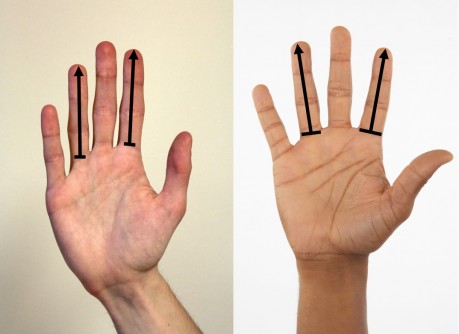 Newswise — Maybe you should take a good look at your partner’s fingers before putting a ring on one. Men with short index fingers and long ring fingers are on average nicer towards women, and this unexpected phenomenon stems from the hormones these men have been exposed to in their mother’s womb, according to a new study by researchers at McGill University. The findings might help explain why these men tend to have more children. The study, showing a link between a biological event in fetal life and adult behaviour, was published in the journal Personality and Individual Differences.

Men’s index fingers are generally shorter than their ring fingers. The difference is less pronounced in women. Previous research has found that digit ratio – defined as the second digit length divided by the fourth digit length – is an indication of the amount of male hormones, chiefly testosterone, someone has been exposed to as a fetus: the smaller the ratio, the more male hormones. The McGill study suggests that this has an impact on how adult men behave, especially with women.

“It is fascinating to see that moderate variations of hormones before birth can actually influence adult behaviour in a selective way,” says Simon Young, a McGill Emeritus Professor in Psychiatry and coauthor of the study.

Smiles and complimentsSeveral studies have been conducted previously to try to assess the impact of digit ratio on adult behaviour. This one is the first to highlight how finger lengths affect behaviour differently depending on the sex of the person you are interacting with. “When with women, men with smaller ratios were more likely to listen attentively, smile and laugh, compromise or compliment the other person,” says Debbie Moskowitz, lead author and Professor of Psychology at McGill. They acted that way in sexual relationships, but also with female friends or colleagues. These men were also less quarrelsome with women than with men, whereas the men with larger ratios were equally quarrelsome with both. For women though, digit ratio variation did not seem to predict how they behaved, the researchers report.

The researchers were surprised to find no statistically relevant link between dominant behaviours and digit ratios. They suggest future research could study specific situations where male dominance varies – such as competitive situations with other men – to see whether a correlation can be established.

This study was funded by a grant from the Social Sciences and Humanities Research Council – Canada.