Cancer: The Cost of Being Smarter Than Chimps? 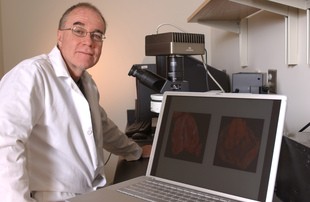 John McDonald, chair of the School of Biology and chief research scientist at the Ovarian Cancer Institute, is testing whether the cognitive superiority of human's brains over chimps has lead to an increased propensity for cancer.

Newswise — Are the cognitively superior brains of humans, in part, responsible for our higher rates of cancer? That's a question that has nagged at John McDonald, chair of Georgia Tech's School of Biology and chief research scientist at the Ovarian Cancer Institute, for a while. Now, after an initial study, it seems that McDonald is on to something. The new study is available online in the journal Medical Hypothesis and will appear in the forthcoming issue of the journal. "I was always intrigued by the fact that chimpanzees appear to have lower rates of cancer than humans," said McDonald. "So we went back and reanalyzed some previously reported gene expression studies including data that were not used in the original analyses." McDonald and his graduate students, Gaurav Arora and Nalini Polivarapu, compared chimp-human gene expression patterns in five tissues: brain, testes, liver, kidneys and heart. They found distinct differences in the way apoptosis — or programmed cell death — operates, suggesting that humans do not "self-destroy" cells as effectively as chimpanzees do. Apoptosis is one of the primary mechanisms by which our bodies destroy cancer cells. "The results from our analysis suggest that humans aren't as efficient as chimpanzees in carrying out programmed cell death. We believe this difference may have evolved as a way to increase brain size and associated cognitive ability in humans, but the cost could be an increased propensity for cancer," said McDonald. Like all evolutionary hypotheses, this can't be proven absolutely, according to McDonald. However, his lab has recently obtained additional direct experimental evidence consistent with the hypothesis that apoptotic function is more efficient in chimps than in humans.