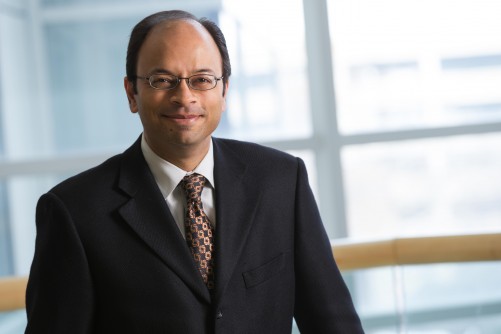 Mukesh Jain, MD, and colleagues have been awarded a five-year, $6M grant from the Paris-based Fondation Leducq to conduct a thorough analysis of the pivotal role of KLF2 in vascular-related functions and disorders. The team’s grant was one of five awarded globally and aims to improve knowledge and treatment of cardiovascular disease.

Newswise — Transcription factors are proteins that determine whether specific genes are transcribed or not by binding to DNA. In other words, they help turn genes "on" or "off."

One such transcription factor, Kruppel-like factor (KLF) 2, plays a central role in many processes critical to cardiovascular homeostasis. Researchers also understand that levels of KLF2 increase with health and decline with disease. “We are very keen to identify the cellular pathways that regulate the increase or decrease in KLF2 levels in order to develop novel strategies to sustain levels and ameliorate cardiovascular disorders,” said Mukesh K. Jain, MD, professor of medicine at Case Western Reserve University School of Medicine and the Ellery Sedgwick Jr. Chair & Distinguished Scientist, University Hospitals Cleveland Medical Center. He is part of a trans-Atlantic network of international leaders in cardiovascular medicine who aim to find out.

Jain and his colleagues have been awarded a five-year, $6M grant from the Paris-based Fondation Leducq to conduct a thorough analysis of the pivotal role of KLF2 in vascular-related functions and disorders. The team’s grant was one of five awarded globally and is, in the French foundation’s words, “an indication of [our] enthusiasm for your proposal, and faith that the collaborative work of the network will significantly improve our knowledge and treatment of cardiovascular disease.”

KLF2 and members of this family of transcription factors regulate hundreds of genes that control blood vessel function, often simultaneously, turning on and standardizing a coordinated genetic program governing vascular health. This includes the development of new blood vessels in embryos and adults and embryonic heart valve formation. KLF2 is also a major anti-inflammatory and anti-clotting agent, thereby promoting vascular health. But lower levels of KLF2 can cause inflammation and narrowing of the arteries, resulting in blockages in blood vessels, conditions that affect tens of millions of people worldwide. Additionally, the effects of cardiac medicines known as statins are mediated in part through KLFs.

How is KLF2 involved in such a broad range of life-sustaining activities and potentially lethal breakdowns?

To help answer this question, Jain and his colleagues have three aims. First, determine how KLF2 actually functions within a cell. This entails illuminating the cellular machinery it uses in controlling vascular processes. Second, determine what specific genes with blood vessels it targets to turn on and off. Third, test the findings of aims one and two in both human tissues and relevant mouse genetic models. The team expects that these studies will reveal the full KLF2 regulatory set of connections and identify new treatment targets for cardiovascular disease. The team will use insights from its studies on KLF2 to conduct analysis of KLF4, a related molecule with similar functions.

“KLFs are now known to serve as master regulators of the endothelium, the tissue that forms a single layer of cells lining the blood vessels, heart, and lymphatic vessels,” said Jain. “Studying the mechanisms of KLF2 expression and its involvement in vascular physiology, and gaining an ability to control that function, have the potential to treat a broad array of cardiovascular diseases ranging from stroke and heart attack to brain-based cerebrovascular malformations.”

Among its techniques, the research team will use CRISPR-Cas9-based approaches to delete certain genes in the KLF2 sequencing process and determine what affect this has on vascular development and function. This will help specify which genes are involved in various processes and diseases, boosting overall understanding and identifying targets for treatment, either through medication or gene-editing. The researchers will also utilize already FDA-approved medications on human cells and mice, seeking to determine which ones might be used to target the findings of the investigative team.

This work builds on seminal findings Jain published in 2004 that led to the discovery of KLFs in vascular biology. While KLFs were known to regulate critical functions based on studies in the 1970’s and 1980’s in flies, the link to cardinal functions of blood vessels was amongst the first in mammalian systems and represented a major advance in cardiovascular biology. KLFs have also been implicated in numerous biological processes that affect the development of cancer, metabolic disorders, immune dysfunction, and aging.