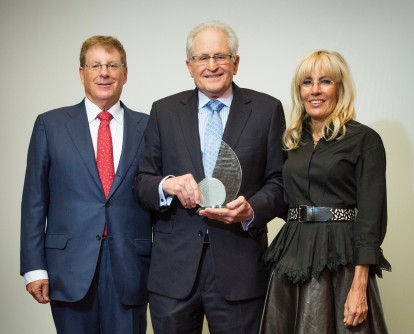 Dr. Stephan R. Targan, Director of the Inflammatory Bowel and Immunobiology Research Institute at Cedars-Sinai, has been focused on finding solutions to complex scientific problems ever since childhood. Drawn to the study of IBD because, he says, “it was one of the most difficult puzzles to solve,” Dr. Targan has become one of the IBD field’s most renowned physician scientists. Perhaps one of his most significant contributions to the field is his training and mentorship of hundreds of physicians, locally and globally, who have emerged as international thought leaders in their own right, creating a positive ripple effect that has benefited patients worldwide.

Newswise — LOS ANGELES (Sept. 20, 2017) –  Stephan R. Targan, MD, a pioneering physician and researcher in gastroenterology, has been awarded the Sherman Prize for groundbreaking work in the understanding and treatment of debilitating inflammatory bowel disease (IBD).

Targan, director of the F. Widjaja Foundation Inflammatory Bowel and Immunobiology Research Institute at Cedars-Sinai, accepted the award recently at a private ceremony in New York.

The Sherman Prize was established by the Bruce and Cynthia Sherman Charitable Foundation to recognize and reward outstanding medical professionals, educators and advocates who are advancing research and improving patient care in the field of Crohn’s disease and colitis.

Supporting the work of exceptional healthcare professionals is a personal mission for the Shermans, who have family members affected by Crohn’s.

“Not only has Dr. Targan helped to fundamentally change the way IBD is treated, he has trained, mentored and inspired hundreds of physician scientists around the world, multiplying the impact of his life’s work,” said Bruce Sherman.

“He has brightened the future of millions of people living with the disease.”

Targan is the principal investigator of the longest study of genetic and immunological causes of inflammatory bowel disease ever funded by the National Institutes of Health.

A hallmark of his research is an interdisciplinary approach to understanding the various ways IBD can affect patients. He calls it a “360” approach.

“We bring experts together from several areas of science to try and understand this disease,” Targan said.

“Our work has revealed that this challenging disorder in fact comprises several forms of the disease, each with a different biology causing chronic and painful inflammation of the intestines.”

Targan received one of two Sherman Prizes of $100,000 awarded to individuals with extraordinary records of achievement in addressing the challenge of IBD.

“The award will be used to support promising research with an eye towards personalizing treatment. Our goal is to identify patients with particular subtypes of the disease and design drugs to treat their specific form of the illness,” Targan said.

One of the most significant outcomes of Targan’s research has been scientific discoveries and clinical trials that have led to the development of the first biologic treatment for IBD patients, an effective therapy that can put the disease in remission. His passion for this work is fueled by a desire to eliminate the suffering he has witnessed over a long career.

“Some of the sickest people with this disease come to us from around the world. People who are so frustrated in their search for relief. People who have lost hope,” Targan said. “There is nothing more exciting than being able to turn the course of their devastating disease and improve their lives. It is incredibly rewarding.”