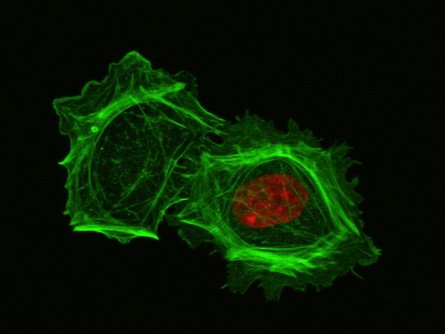 Two human endothelial cells are shown. The cell to the left had its nucleus removed. The cells have been stained with phalloidin to label in green the actin cytoskeleton, and with a different dye to label the nucleus red.

Newswise — University of North Carolina Lineberger Comprehensive Cancer Center researchers have revealed new details of how the physical properties of the nucleus influence how cells can move around different environments – such as “soft” tissue like brain and fat, or “stiff” tissue like cartilage or bone.

The researchers removed the nucleus from cells or disconnected them from the cell’s structural scaffolding known as the “cytoskeleton.” They watched how the modified cells were able to move in different surfaces to better understand the role of this central cell structure in movement. Their findings from the study, published in the Journal of Cell Biology, contribute to the basic scientific understanding of the mechanical properties of the nucleus, and they also may shine more light on the role of the nucleus in diseases in which the nucleus can be disrupted or corrupted – like cancer.

“Whereas much is known about the function of the nucleus as a repository of DNA and site of gene regulation, our analysis concerns the role of the nucleus as a physical structure that is affecting cell behavior independent of gene regulation,” said UNC Lineberger’s Keith Burridge, PhD, Kenan Distinguished Professor in the UNC School of Medicine Department of Cell Biology and Physiology. “Our work shows that the physical presence of a cell nucleus regulates how a cell responds to the stiffness of its environment.”

They found that cells without a nucleus, or in which the nucleus has been disconnected from the cells’ structure, can migrate on rigid, two-dimensional structures such as a cell culture dish where scientists can grow and observe cells. However, they move more slowly on soft surfaces, and don’t move at all on three-dimensional matrices. Their conclusion was that the nucleus affects how cells respond to their physical environment.

“We found that cells lacking a nucleus or with a disconnected nucleus exert less force and show decreased mechanical energy,” Burridge said.

Their findings are important to the basic understanding of cell mechanics. But they could give insight into cancer and other diseases that affect the physical properties of the nucleus.

“Many cancer cells display abnormal nuclei that differ in their size, shape and mechanical properties,” said the study's first author David M. Graham, PhD, a postdoctoral research associate in the UNC School of Medicine Department of Cell Biology and Physiology. “Consequently, although our research is at a fundamental level of cell biology, we believe it should contribute to our overall understanding of these disease situations.”