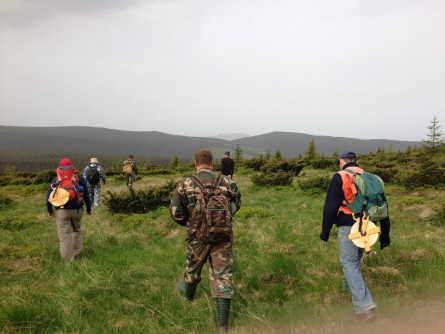 A UVM expert on Ukraine's forests, Prof. William Keeton, weighs in on the radiation risk in Chernobyl's forests, and reports that Russia is planning to steal Ukraine's forests. Photo: Keeton and colleagues on a research trip in the Carpathian Mountains, Ukraine, in 2013.

Russia’s invasion of Ukraine—and the seizure of the Chernobyl plant and surrounding Exclusion Zone—puts the forest at an elevated risk of forest fire, which could cause a potentially dangerous—even catastrophic—release of radiation into the atmosphere, Keeton says. Read our Q&A with Prof. Keeton below:

Are Chernobyl’s forests a radiation risk?

Beyond the actual nuclear plant, the forests around Chernobyl do present a risk. These forests absorbed tremendous amounts of radiation during the 1986 disaster, and the trees and soils still contain significant radiation—in the form of large amounts of radioactive elements called radionuclides. If a forest fire happens—from a bomb, explosion, or fire—this radiation could be released into the atmosphere.

The Chernobyl forest is coniferous and relatively fire-prone—the trees are mostly Scots pine. Given the mix of radiation and fire-prone vegetation, the U.S. Forest Service has worked closely with Ukrainian experts to enhance local fire management capacity. The war and Russian occupation now hinder that capacity if fires break out.

The forest’s proximity to a warzone—on at least two fronts—creates an elevated risk for fire. Russian soldiers have now seized the Chernobyl plant, with reports of gunfire, explosions, hostages, power line damage, and other concerns. On the other side of the forest is Kyiv, which is being bombarded just 40 miles away.

How big are Chernobyl's forests?

This is a huge coniferous forest—about the size of Rhode Island—roughly 1,000 square miles in size. The forests have populations of large mammals, including predators, that are rare in much of Europe, like wolves, lynx, brown bear, woodland bison, and Przewalski's horse.

Any lessons from history?

Before now, the most serious recent forest fire incidents were in 2010 and 2020. There were significant concerns that radiation could be released, but luckily those crises were averted. The fires were put out just before reaching or burning extensively in the Chernobyl forests.

With the original disaster in 1986, the wind was a crucial factor. It blew the radiation north, towards the border of Belarus, instead of south, likely saving Kyiv with its larger population.

A recent media report suggested Russia was planning to cut down Ukraine’s forests to raise money for military operations. At this point, I think plundering timber for money is unlikely—but that could change if Ukraine is occupied for a long time. As it stands, many of Ukraine’s commercial forests are in the west—in the Carpathian Mountains—far from Russia, and the current fighting. But there are forested expanses in the Polesia region along the Belarus border, and certainly some timber in the occupied zone north of Kyiv, that could be logged.

Using satellite imagery, the U.S. Forest service has worked closely with NGOs in Ukraine to monitor and track illegal timber harvesting. That would show Russian logging activity and global wood markets would be alerted.

Any signs of environmental warfare?

A March 4 letter from Russia’s Minister of Defense sought permission from Russia to cut down forests in any Russian controlled region, regardless of age, type, or protection status. It does not directly mention Ukraine, but that’s the implication.

I believe the letter is creating a false justification for environmental terrorism or warfare. Forests cover 17% of Ukraine. So, while the many Ukrainian forests (in the Carpathians, the west) are not yet directly at risk, forests in Ukraine’s north and northwest, in the path of the invading army, are at severe risk of wanton destruction. It would be an attempt to destroy Ukraine’s natural heritage.

William Keeton is a Fellow at UVM’s Gund Institute for Environment and Professor in the Rubenstein School of Environment and Natural Resources. He has worked extensively in Ukraine, most recently as a Fulbright Scholar.