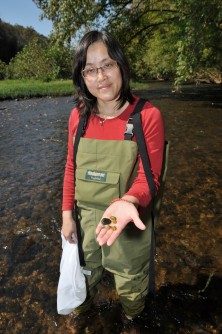 Newswise — Mollusk researchers at Virginia Tech in the United States and at the Freshwater Fisheries Research Center in Wuxi, China, are collaborating to promote freshwater mussel conservation, develop more robust and productive pearl-producing Chinese mussels, and possibly introduce a U.S. mussel to China that has the potential to produce colored pearls.

“Just like the eastern United States, China has a rich diversity of freshwater mussels, which is imperiled by humans building dams, for instance, and introducing toxins into the waterways,” said Eric Hallerman, a professor of fish and wildlife conservation in Virginia Tech’s College of Natural Resources and Environment.

Both countries are working on mussel conservation, and Dan Hua of Blacksburg, Va., a doctoral student in fish and wildlife conservation in the college and laboratory manager of Virginia Tech’s Freshwater Mollusk Conservation Center, decided an information exchange and collaboration would benefit both.

Hua worked at the Freshwater Fisheries Research Center in Wuxi before coming to Virginia Tech and retains her associate professor and research supervisor titles there. She has been studying with Hallerman, who is a leader in genetic improvement of aquaculture stocks, aquaculture biotechnology and related public policy, and genetics education.

“Hua told her Chinese colleagues that collaboration with Virginia Tech could help,” said Hallerman, who is affiliated with the university’s Fralin Life Science Institute. “We visited Wuxi in 2011 and in a second trip in 2013 we dedicated a new lab there.”

Neves, founder and former leader of Virginia Tech’s Freshwater Mollusk Conservation Center, has conducted field and laboratory studies of Virginia’s and Tennessee’s endangered mussels for 30 years, including development of survey and propagation techniques for federal and state agencies.

Hubbs also has restored mussels to Tennessee rivers and provided Hua with the pearl-producing pink heelsplitter mussel for her research, which is playing a role in the new partnership.

There have already been tangible outcomes from the new lab, called the Freshwater Fisheries Research Center-Virginia Tech Cooperative International Laboratory for Germplasm Conservation and Utilization of Freshwater Mollusks.

“The North American pink heelsplitter, which produces pink- to purple-colored pearls, is advancing as a candidate species for production of colored freshwater pearls in China,” Hallerman said. “The colored pearls would be good for the Chinese pearl industry, and producing the baby mussels in Tennessee for shipment to China would be a good cottage industry for that state.”

Virginia Tech hosted visiting scientist Wen Haibo of the Freshwater Fisheries Research Center in November to see pink heelsplitter propagation. Wen and his Virginia Tech colleagues are also studying the possibility of selective breeding of the Chinese mussel Hyriopsis cumingii, which is currently the focal species for freshwater pearl production in China.

“The faster it grows, the faster it produces pearls,” said Hallerman. “Males grow faster, so we want to be able to do selective breeding for male-skewed production.”

More information may be found on the Virginia Tech News website.