Coconut Water Is an Excellent Sports Drink for Light Exercise 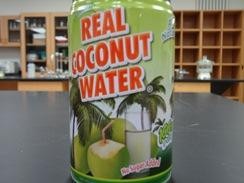 Coconut water is a good choice for a sports drink for lighter exercise.

EMBARGOED FOR RELEASE: Monday, Aug. 20, 2012, 2 p.m. Eastern TimeNote to journalists: Please report that this research was presented at a meeting of the American Chemical Society.

However, people who engage in strenuous exercise that involves a lot of sweat might want to take it all with a grain of salt ― literally ― or stick with a more traditional sports drink like Gatorade, said Chhandashri Bhattacharya, Ph.D. She presented a report on an analysis of coconut water to the ACS, the world’s largest scientific society, which is meeting here this week.

“Coconut water is a natural drink that has everything your average sports drink has and more,” said Bhattacharya. “It has five times more potassium than Gatorade or Powerade. Whenever you get cramps in your muscles, potassium will help you to get rid of the cramps. It’s a healthy drink that replenishes the nutrients that your body has lost during a moderate workout.”

Bhattacharya said that the potassium in coconut water also may benefit other people who do not exercise. The typical American diet is low in potassium and high in sodium, which is found in table salt. Other research has shown that such an imbalance is unhealthy. In one study, people who ate foods low in potassium and high in sodium had twice the risk of death from heart disease and a 50 percent higher risk of death from all causes. Other analyses indicate that a 12-ounce serving of coconut water has more potassium than a banana.

And it is high in healthful antioxidants, added Bhattacharya, who is with Indiana University Southeast in New Albany.

Coconut water is the clear liquid found most abundantly inside young, green coconuts, which are fruits of the coconut palm. It long has been a popular drink in the tropics, where street and beach vendors sell green coconuts with a drinking straw in the top. Coconut water now is available in bottles, cans and other containers, and marketers have promoted it as a healthy beverage.

Coconut water’s lower sodium content is where it fails as a good sports drink for people who engage in strenuous exercise that produces a lot of sweating, Bhattacharya said. Sweating makes people lose more sodium than potassium, and coconut water alone can’t replace that lost sodium.

Coconut Water (Coconut liquid endosperm) is widely consumed in many countries as a refreshing beverage but its unique chemical composition of electrolytes and nutrients can make it a good natural substitute of sports drink. This study explores the nutrients in Coconut Water (Coconut liquid endosperm) to know how much people were replenishing compared to sports drinks in the market.