Color-Coded Chemistry Tests Get a Boost 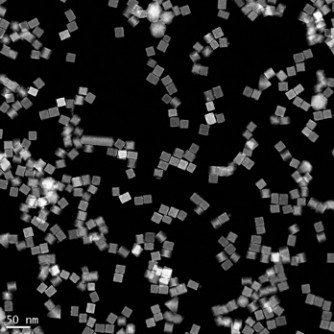 The nanostructures Xia works with are best seen with a scanning electron microscope (SEM); many of them have distinct forms, which make them helpful for K-12 education.

“The tests are common and inexpensive, but not exact," Xia says. "Over the past decade, researchers have proposed peroxidase mimics to improve the assays.”

To make them more effective, Xia will push the catalytic activity of the mimics. He starts with the structure, a core-shell nanostructure. That is, they have a palladium core with a surface coating of another noble metal, which could be platinum, gold or others. Xia compares the nanostructures' careful atomic arrangements to the masonry of a building; he needs to optimize the size, shape and composition of the parts to make a seamless whole.

Cary Chabalowski, the chair of the Department of Chemistry, says Xia's precision is essential for nanotech and surface science research.

"His work holds great promise for significant breakthroughs in general fields of nanoscience, nanobiomedicine and biomimetic catalysis," he says, adding that the project also introduces "students to the fascinating area of the nanoscale world where quantum-meets-classical behavior and amazing phenomena can be seen."

Xia plans to incorporate both undergraduate and high school researchers into his lab and will visit local Upper Peninsula classrooms. He's even willing to go back to kindergarten.

"The kids are very interested in the shapes, for example," he says of showing microscopy images to five- and six-year-olds at a local elementary school. "We work with a group of very uniform and well-shaped structures—seeing examples of such materials helps foster their interest and curiosity about nanoscience."