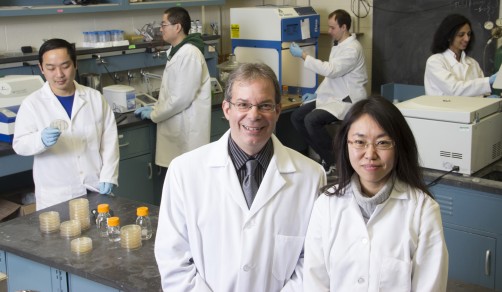 Trudeau Institute Associate Member and Clarkson Adjunct Associate Professor of Biology Timothy J. Sellati, front and left, and Clarkson Assistant Professor of Chemistry & Biomolecular Science He Dong are leading research teams to focus on how to better treat infections through immunoengineering. The research is a collaborative effort between Clarkson University and the Trudeau Institute.

Newswise — The first publication out of a collaboration between Clarkson University and the Trudeau Institute aims to improve the fight against bacterial infections through immunoengineering.

The research teams, led by Clarkson Assistant Professor of Chemistry & Biomolecular Science He Dong and Trudeau Associate Member and Clarkson Adjunct Associate Professor of Biology Timothy J. Sellati, are focusing on how to better treat infections.

Antimicrobial peptides (AMPs) represent a new antimicrobial therapy to overcome the prevalence of antibiotic-resistance found in conventional antibiotic treatment, Dong said. However, conventional AMPs suffer from structural instability and substantial cytotoxicity, meaning they are toxic to cells. This has dramatically hampered their development, commercialization and application in clinical settings.

The researchers are developing a system to engineer new, stable peptides that will kill bacteria without harming healthy human cells.

“Our work represents a fundamentally new and unique approach to the treatment of antibiotic-resistant bacterial infection by exploiting multiple antimicrobial peptides in the form of Self-Assembled Antimicrobial Nanofibers, which we term as SAANs,” she said. “SAANs demonstrated potent antimicrobial activity, but most importantly showed greatly reduced harm toward healthy human cells. Fundamentally, we're trying to understand the molecular mechanism behind the unique properties of SAANs, and that's going to have a significant impact on practical application of these materials as a new technology for anti-infective therapy development."

"This paper is a good starting point, and there is a lot we can pursue along this pathway," she said. "We're excited, and we're looking down the road to new opportunities."

Sellati said immunoengineering is a marriage of the areas of immunology, which focuses on how healthy bodies function and how they fail to function properly when sick, and engineering, which focuses on the mechanics of how things function. The partnership allows faculty from Clarkson and Trudeau to bring together their unique perspectives and skill sets to solve problems and develop cures.

"It has provided an opportunity for scientists with different experiential backgrounds to get together and develop projects," he said. "For me, the personal benefit has been to move my infectious disease research in a new direction with He Dong, who has expertise in chemistry and materials science and engineering."

Clarkson chemistry doctoral candidates Dawei Xu and Linhai Jiang, Clarkson undergraduate biology student Derek Dustin, and Trudeau postdoctoral fellow Anju Singh worked with Dong and Sellati on the paper. Dong said the partnership between her group and Sellati's group is a valuable training experience for both undergraduate and graduate students.

"A successful collaboration often requires a constant and active communication between groups, and in this partnership it's important to promote the knowledge exchange and discussion between our groups," she said.

Sellati said he enjoys working with the undergraduate students from Clarkson because they bring enthusiasm and new ideas to the table. He has been especially impressed with the research interests and quality of work from the students who participate in the Clarkson Trudeau Biomedical Scholars program.

Students don't usually develop an appreciation for research until later in their academic careers, Sellati said, but the collaboration between Clarkson and Trudeau allows students to preview what it is like to have a career in science and research while they are still undergraduates.

"They now have an opportunity to work more closely with world-renowned research scientists who are working on the cutting edge of immunology and infectious disease," he said.

Prospective students can find out more about the Clarkson Trudeau Biomedical Scholars program at http://www.clarkson.edu/trudeauscholar .

The Trudeau Institute's fundamental research on immunity fosters the development of vaccines, treatments and cures for many life-threatening diseases, including cancer, tuberculosis and influenza. The Institute is supported by federal and state grants and contributions from individuals, private foundations and corporations. For further information about the Trudeau Institute, go to www.trudeauinstitute.org.