Combination Therapy May Offer Better Outcomes for Patients with Retinoblastoma 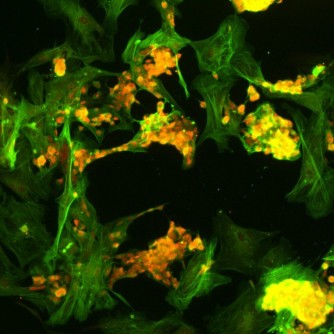 Newswise — Researchers at The Saban Research Institute of Children’s Hospital Los Angeles (CHLA) have demonstrated that targeting survivin – a protein that inhibits apoptosis or cell death – enhances the effectiveness of chemotherapy in cells and mouse models of retinoblastoma (Rb), the most common malignant tumor of the eye in children.

The study – led by Charles Gomer, PhD, of the Children's Center for Cancer and Blood Diseases at CHLA and Jonathan Kim, MD, director of the retinoblastoma program at The Vision Center at CHLA – demonstrates for the first time that the combination of a survivin inhibitor called YM155 and chemotherapy provides a therapeutic advantage for Rb cells and tumors. The results were recently published online in PLOS One.

While treatments for retinoblastoma vary depending on size and location of the lesions, most therapy includes chemotherapy agents such as carboplatin and topotecan. The CHLA researchers examined whether such agents induced a pro-survival phenotype associated with increased expression of survivin in Rb cells and Rb tumors growing in mouse models.

They found that exposure to chemotherapy resulted in elevated levels of survivin in two human Rb cell lines, but not in normal ocular retinal pigmented epithelial (RPE) cells. They also documented that cellular levels of survivin were significantly decreased in Rb cells, but not in RPE cells, when exposed to YM155. The combination of YM155 and chemotherapy agents was also most effective in enhancing Rb cell death when compared to either alone.

“Our study shows proof of concept, that we can enhance chemotherapeutic approaches to retinoblastoma while using the same dosage,” said Gomer, who is also a professor in the Departments of Pediatrics and Radiation Oncology at Keck School of Medicine of the University of Southern California. “We’re hopeful that following additional preclinical studies that this combination therapy will offer better outcomes to children with retinoblastoma and perhaps the possibility of reduced chemotherapy, reducing long-term adverse effects.”

Jonathan Kim is also an associate professor in the Department of Ophthalmology and the Roski Eye Institute at USC. Additional contributors include co-first authors Angela Ferrario and Marian Luna; Natalie Rucker, Sam Wong and Ariel Lederman of The Saban Research Institute of Children’s Hospital Los Angeles. The study was supported in part by National Institutes of Health grant UL1TR000130, a grant from ThinkCure and by the Las Madrinas Endowment for Experimental Therapeutics in Ophthalmology.

About Children’s Hospital Los Angeles Children's Hospital Los Angeles has been named the best children’s hospital on the West Coast and among the top five in the nation for clinical excellence with its selection to the prestigious U.S. News & World Report Honor Roll. Children’s Hospital is home to The Saban Research Institute, one of the largest and most productive pediatric research facilities in the United States. Children’s Hospital is also one of America's premier teaching hospitals through its affiliation since 1932 with the Keck School of Medicine of the University of Southern California.For more information, visit www.CHLA.org or visit our blog at www.ResearCHLAblog.org.