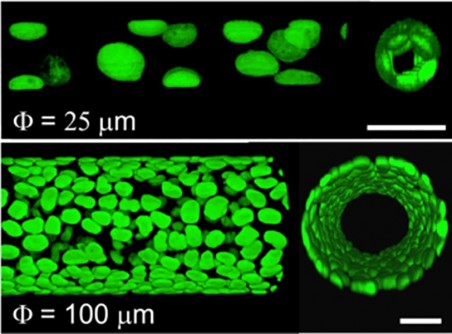 The arrangement of cells into lumen-containing structures inside polydimethylsiloxane (PDMS) microtubes with varying diameters (25 microns and 100 microns).

Newswise — A team of scientists from Singapore and France, led by Professor Lim Chwee Teck, Principal Investigator at the Mechanobiology Institute, Singapore and the Department of Biomedical Engineering at the National University of Singapore, has described a novel ‘microtube’-based platform to study how tubular organs, such as the heart and the kidneys, form under the various topographical restrictions commonly experienced inside the body. This study was published online in Nature Communications on 15 November 2017.

The number of people suffering from diseases like atherosclerosis, kidney and liver failure is on the rise worldwide. Although these potentially life-threatening diseases affect different parts of the body, they all arise due to defects in the formation of epithelial tubes – a fundamental type of tissue that makes up many of our organs in addition to the heart, kidneys or liver. The lungs, blood vessels, brain, and pancreas are vulnerable to defective epithelial tube formation as well.

Epithelial tubes are cylindrical structures that are made of a single or many layers of epithelial cells. Serving as pipelines throughout the body’s organs and tissues, epithelial tubes have important physiological roles, from the delivery of essential gases, liquids, and macromolecules around the body to the elimination of metabolic waste.

These structures are formed in the earliest stages of embryonic development, when groups of cells arrange themselves around a central hollow space known as a lumen. Given their importance in maintaining the organs in a healthy and functional state, researchers have long been trying to understand how epithelial tubes develop, and why defects in their development can arise.

Recently, evidence has emerged to show that the physical environment inside our body has a major influence in how all tissues, including epithelial tubes, form, and this has spurred researchers to seek new approaches to studying these old problems.

Several groups, for example, explored tube development by growing cells in artificial two-dimensional (2D) systems that allowed them to manipulate the physical properties of the environment and assess how the ability of cells to form tubes was affected. These systems, however, had a major drawback in that the flat conditions of the 2D space could not accurately mimic the dynamic, three-dimensional environment of the body.

To overcome this shortcoming, Prof Lim’s team employed an advanced, yet simple technique called microfabrication to synthesise three-dimensional, micron-sized tubular channels that they refer to as microtubes. These microtubes were placed in front of an advancing group of cells. This set-up allowed the cells to crawl into the hollow spaces of the microtubes, spread along their curved inner surfaces, and rearrange into lumen-containing structures that resembled biological tubes.

To test if the physical properties of the microtubes had any influence on the ability of cells to form lumen-containing structures inside, the researchers introduced a single variable physical parameter. They created microtubes of different sizes, ranging in diameter from 25-250 microns. When observing the cells under the microscope, they noted that the cells forming tubes within narrower confines behaved markedly different to those that had more space to move.

The highly confined spaces inside the narrower tubes forced the cells to move slowly. The cells often seemed to fluctuate between backward and forward movements, which further slowed down their movement. Occasionally, in the narrowest of tubes, the cells at the front failed to stay together, and groups of cells would detach from the larger tube-forming group.  Conversely, cells inside the broader tubes moved ahead progressively, and remained as a group, similar to how they would move on a flat surface.

Often, the cells in our body have to move through highly constrained spaces in order to rearrange into various structures like tubes. Such conditions, in combination with molecular and genetic factors, ensure that tubes of diverse shapes and sizes are formed in the correct manner across various organs.

The simple microtube platform described in this study provides researchers with crucial insights into the underlying mechano-physiology that governs the arrangement of cells into tubular organs during development. More importantly, it will also help theorise how extreme physical constraints caused by certain pathological conditions could lead to erroneous development of the tissue that manifest as a number of serious, or even, life-threatening diseases. This knowledge will be vital for the development of novel and efficient treatment strategies that, in addition to targeting aberrant molecular pathways, would also be aimed at counter-acting extreme physical alterations that occur during a number of such diseases.